Re-Thinking Where and How Much Silage Shrinks

When dairy producers think of silage shrink, they typically mean the difference between the tons of fresh forage harvested and the tons of ensiled forage actually fed. This includes forage spilled between the scales and the packed pile, losses during fermentation, spoiled forage shoveled off the pile, losses during defacing, and spillage from the loader or over the mixer. Shrink can be a big financial loss.

Federal and state agencies are becoming concerned enough with the environmental impacts of farming practices that they have begun regulating silage production (mainly in California for now) to mitigate losses that may affect air and water quality. The government agencies have been most concerned with volatile compounds escaping from the face of the silage that may impact air quality. However, there is very little relevant data that there actually is a problem, or if the recommended mitigation efforts are meaningful. 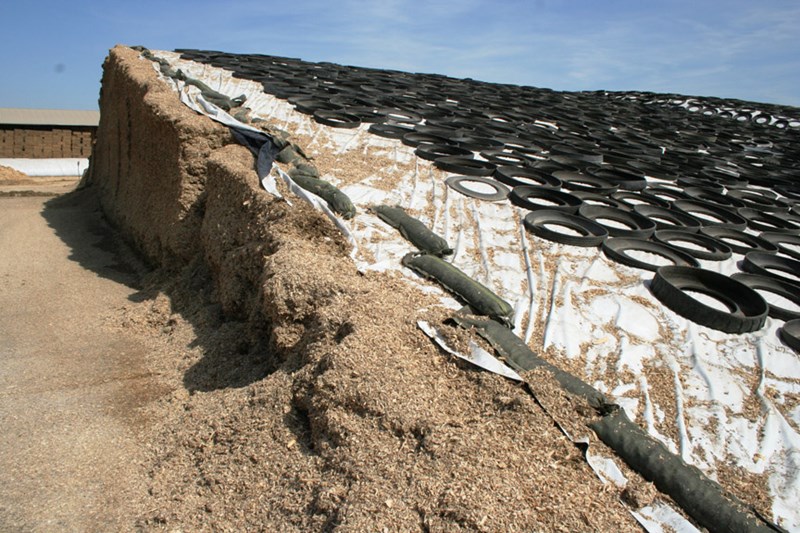 Dr. Peter Robinson took on a huge project to try to shed some light on this issue in California. He studied silage shrink on four dairies using eight corn silage piles (two rollover, one bunker, five wedge) with 1,000- to 13,000-ton capacities. (You can get more detail from his paper in the Western Dairy Conference Proceedings held March 3-5.) The silage piles he studied were covered within 48 hours with oxygen barrier film, black/white plastic and weighted with tire chains and fed out by professional crews using electronic silage tracking systems.

Average total wet weight shrink was 8.4% (the amount of fresh forage over the scales minus the amount actually fed) and is similar to many commercial estimates. Dry matter (DM) shrink was 6.8% as determined by oven drying the samples. However, actual DM losses were only 2.8% after the weight of volatile carbon compounds driven off during the oven drying process were added back. As these volatiles (e.g., acetic, propionic and butyric acids plus ethanol) are actually captured in the fermented silage and fed out, oven drying the silage to create a “DM” loss overestimates real nutrient loss. This means that most wet weight shrink is water.

As the pile is packed, water from fresh forage evaporates. The plants are still “alive” and respiring at this point. The Carbon dioxide (CO2) released as they use up stored sugars is measured as shrink, and is a greenhouse gas, but it is odorless and doesn’t affect air quality.  After the silage is covered and the oxygen is used up, the silage pH goes down and largely stabilizes the silage, including the volatile carbon compounds.

California regulatory agencies are concerned with volatile carbon losses, especially from the exposed silage face. You can smell these compounds as they are exposed to air. However, Robinson reported that most of the face losses were water, and that actual DM (and volatile carbon compound) losses from the face were near zero.

Overall, it looks like these dairymen, using standard Best Management Practices, did a pretty good job of preserving the nutrients in the whole corn crop as silage fed to their cows. Isn’t that the whole point of making corn silage? The silage loss mitigations proposed, including high packing density and good face management – practices that we already consider as good silage management practices -- appeared to have little or no impact in corn silage shrink in Robinson’s study. Think about the irony: a government agency concerned with waste in private industry.