Today's post will have nothing to do with farm taxes, farm business, Section 199A.  Instead, tomorrow I will be touring the Case IH Combine plant in Grand Island, Nebraska.  I spent Monday and Tuesday teaching a Tax Advisor Update class and was able to set up a tour for Wednesday.

My parents were married in 1959 and started to farm near Dixie, Washington (about 50 miles west of Idaho and 10 miles north of Oregon).  This area is in the foothills of the Blue Mountains and has very steep hills.  For example, our home place had over 450 feet of elevation change in an 150 acre field.

My dad started with a Massey Harris 92H combine for about the first year.  Here is a photo of what that combine looked like (my brother and I are sitting with my mother): 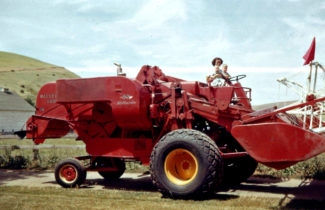 In 1961, my parents upgraded to a IH 151 combine.  This combine had four-way hydraulic leveling which allowed the sieves, etc. to remain level on up to a 50% slope (I can tell you we had slopes steeper than this that the combine could not level one).  Here is a line-up of several 151 combines owned and operated by my relatives

After a few years, we upgraded to a IH 403 combine which was an improvement over the 151, but still did four-way leveling.  Here is a photo of my dad in the 403 combine: 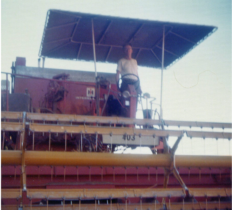 A few years later, we finally upgraded to the IH 453.  That was the last model IH made with a cylinder.  They then brought out the 1400 series which was first Axial Flow combines (no cylinder and no straw walkers).  This would be the last type of combine we had before my dad retired at age 72.    Here is a photo of the new 453 (likely around 1975): 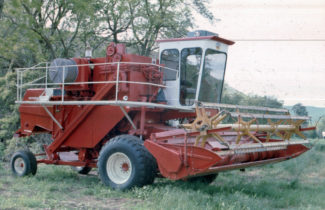 I started operating combines full-time for my dad at about age 14.  One harvest, for some reason I asked my dad if I could spend the night at my friend's house and he said "No problem, just come out in the morning".  As I was passing my uncle's house, he flagged me down and told me that my dad had flipped the combine and was trapped in the cab on a fairly steep hillside (but by far not the steepest).

When I got to the field, I could see the combine flipped over.  Luckily for my dad, he was fairly small (about 5'6" and 140 pounds) and the grain bin was full of dry peas to cushion the combine to not fully crush my dad.

The combine had a throttle lever about 5 inches long and 3/8" inch thick metal that went through my dad's thigh and pinned him inside the crushed cab.  The EMT's finally handed a hacksaw to my dad and he had to cut himself out.

Being the typical tough "German" farmer, my dad spent close to 2 weeks in the hospital, got home and was out doing fall wheat plant not too long thereafter.  Here are some of the photos of the accident. 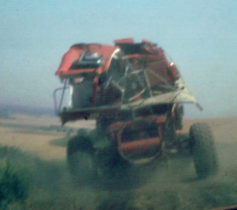 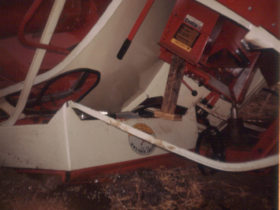 Since I grew up operating "Red" combines, I am very excited to get a tour of the plant tomorrow.