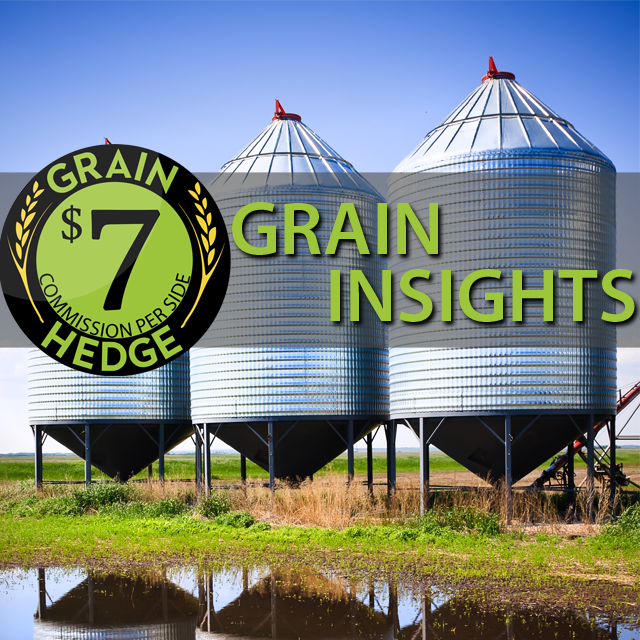 In the overnight session the grains traded lower with December corn down 1 ¼ cents, November Soybeans up 1 and December Chicago wheat down 1 ½ cents. Corn has been trading in a sideways pattern since the end of August and is currently trading in the middle of the range. November Soybeans will likely test its trendline support today or early next week which will be a key

Looking for $7 a trade commissions with streaming real-time quotes for only $1/month; try a Demo of the Grain Hedge Platform!

The weather forecast in Argentina continues to bring moisture which has slowed planting this season. Although Eastern Argentina will see a brief pause in the precipitation today, additional rain is expected late this weekend with even more moisture is in the forecast for next Wednesday through Friday. Soybean planting started over two weeks ago and was reported at 1.8 percent complete in the latest agricultural report.

China has announced that it has cut its minimum purchase price for wheat to $346 per metric ton, which is down 2.5 percent. The move was announced by the National Development and Reform Commission and was intended to help lower the country's massive wheat stockpiles. The cut was widely anticipated and is not expected to impact winter wheat planting decisions for the next season.

The risk of trading futures, hedging, and speculating can be substantial. Grain Hedge is a Branch of Foremost Trading LLC (NFA ID: 0307930)

keyword:
Keyword
Soybeans
Marketing/Communications
Archived Content
Celebrating the Freedom to Trade
4 Questions To Ask Before Switching From GMO to Conventional Crops
Signal to Noise: The China Signal to Watch For
Tale of the tape: NAFTA era trends in U.S. produce trade
Salmonella Dublin Makes Inroads In The Beef Industry