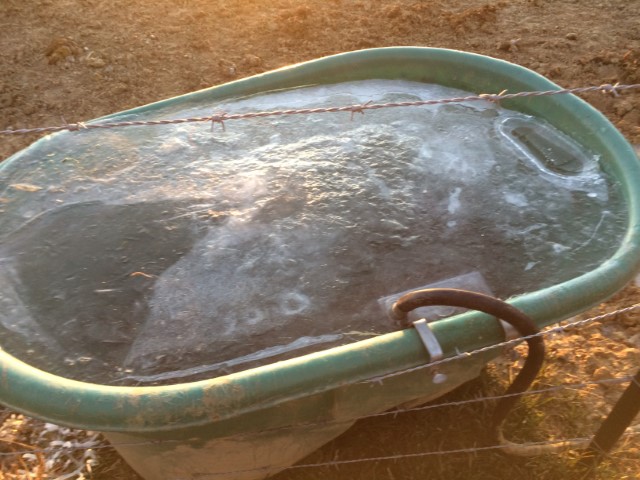 So, my first hard winter as a first generation farmer was in full swing. Although it was a Tennessee winter, it was still cold for this small, southern town.  There have been mornings and nights where the temperature has gotten down to three degrees. Three degrees!  Now, on our ranch, we choose to water our cattle with 100 gallon stock tanks, for better or worse.  When it is three degrees outside, I found out that stock tanks are on the bad end of the spectrum because the water freezes solid. 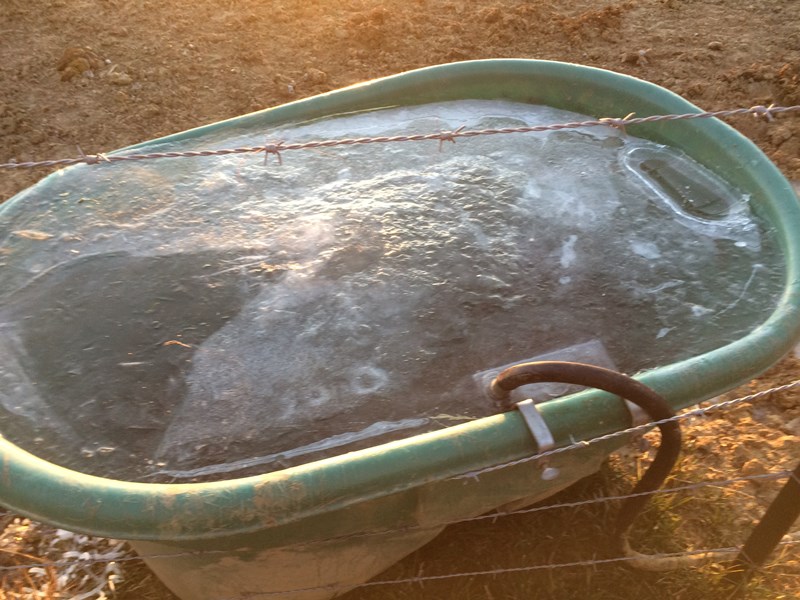 Remember, I have never had a farmer family member or friend growing up to guide me on sound decisions concerning my cattle, so most things I do are learned from the internet, a magazine, or in this case from trial and error.  When 6:00am arrived on a December Tuesday morning, I expected freezing temperatures, so I put on my coveralls, winter hat, and gloves.  When I opened the door to go outside, what I got was slapped in the face by old man winter.  Three degrees on the thermometer!  Luckily, I had retrieved my 150 feet of water hoses from outside the night before, so they were resting ice free in my garage where I was prepared to use them to fill up stock tanks.  After one hour of using a hatchet and a hay pitchfork to remove what seemed like the entirety of all Antarctic ice from all three stock tanks in our pastures, losing use momentarily of a thumb and index finger on each hand, and contemplating the cost of a moving truck to Florida, I went to get the perfectly thawed out 150 feet of water hoses from my garage that would refill my stock tanks.  Here is the part where I found out science is still in control in agriculture, and I came up with Niswander’s Law of Freezing Water.  I connected the 150 feet of hose to our water spigot, and stretched it out to the first stock tank.  I then walked briskly back to the water spigot, turned on the water, and waited for the sound of fresh well water running from the hose into the stock tank.  After a brief delay, and no sounds of water from the very far end of the water hose, I walked briskly to the business end of the hose where the water should be spewing.  As I grabbed the hose from the tank and looked in the exit end, I thought I heard laughter from old man winter, and much to my surprise there was water in its frozen state in the end of that hose.  Three degrees! It took water 150 feet, from my water spigot through a commercial grade hose, to freeze solid.  There was no partially frozen slushy water, or even a little trickle of water from the hose.  Folks, I am telling you that the water was frozen solid in a hose that was just five minutes before in a heated garage.  The cows had congregated at this point around the water tanks, no doubt trying to read the look of confusion on my face, and all they wanted at this point was water in the tanks.   This story, like many of my future stories, solidifies the fact that the five gallon bucket has always been and will always be the most useful tool on any farm.  I went to retrieve two of my favorite five gallon buckets from our shop at this point, knowing the water needed delivered so the cattle could have hydration.  Then for the next 60 minutes, I toted 300 gallons of water 10 gallons at a time from the water spigot to the water stock tanks, and not one drop froze on the 150 foot journey in those buckets.  Old man winter is still in control, and single digit temperatures in the mornings and nights are still happening.  Old man winter may have sabotaged my water hoses, but I learned some things with this experience.  First lesson: Niswander’s Law now states that the likelihood of water freezing exponentially increases as the distance of the liquid state water increases from it’s original spigot exit point.  Second lesson: cattle need water, and that includes in the hottest and coldest times of the year.  They make tools that make it less likely for water to freeze in winter, and I found out stock tank heaters are actually a real thing that work.  Third and final lesson: a great friend and neighbor of mine who has mentored me through my experiences with cattle recently, told me I will either love cattle or leave it.  I heard his words resonant in my head that morning in three degree temperatures, and not one time did I consider loading all my cattle up in a trailer and taking them to a stock sale.  I found out I love cattle, I love agriculture, and I love the caretaker aspect that comes with growing a first generation family farm.  Even if sometimes it means numb fingers, early mornings and late nights, and frozen hoses.  I will likely have more mornings that include walking 150 feet or more with buckets in hand, I will learn ways to do things better through these kinds of experiences, and I will give the knowledge I gain to my sons so they will be able to avoid my same mistakes.  That was my first farming science lesson, and I learned a lot.