The next two stops on the Pro Farmer Profit Briefing Seminar Series trail were close to home, but for all I learned along the way, I may have just as well traveled to Tunisia. Owatonna, Minnesota was the first place I saw a real live natural gas pump, and a truck driver happened to be filling up. I spoke briefly with him to find a new appreciation for natural gas as a legitimate (don't say 'alternative') trucking fuel. 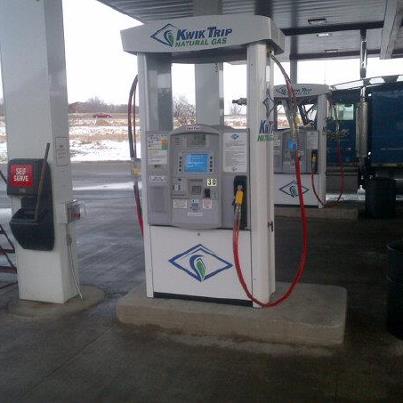 I had the luxury of spending that night in my own bed as our next stop was only 45 minutes from home. Independence, Iowa was another full house and while I offered my very best rookie insights into the fertilizer industry, including my astonishment at encountering a real live natural gas pump -- $1.74 per gallon by the way -- the hometown crowd had some surprises for me...18% of what?

An overflow crowd showed up and spilled out into the lobby outside. It was a thrill for me and the other Pro Farmer analysts on hand. The message I convey is the culmination of a ton of research and a very steep learning curve. It is important to me as an individual and a professional to expose as many growers as possible to what I'm on to with this fertilizer stuff. I was so excited, I completely forgot to visit the Cabela's across the parking lot.

A question from the front row was, "...with all this talk of fracking and big crude supply on hand, where do you see crude going in the next five years?"

A great question, and I actually had asked Pro Farmer's Managing Editor, Brian Grete the same question a few weeks before. Here's the long and short of it...a barrel of crude prices itself out of the money around 65-70 dollars per barrel. Chances of seeing crude less than $70 per barrel are slim. At the time the question was asked, Feb 13 crude was around $93.50.

I continued that a range between $80 and $90 would keep everybody happy, and that is where I see crude going in five years. Bear in mind that breakthroughs in technology tend to recur more quickly on the heels of the one before. But, barring some new breakthrough or catastrophe, expect crude to get comfy between 80 and 90 dollars per barrel. In five years, we must consider inflation so let's put it at $85 - $100 by 2018.

Another fellow asked about including the price of water as an input in our index. The question was in the context of the drought, and if water might one day be traded, bought and sold as a commodity or input on the farm. My thought at the time was that a price per unit would need to be assigned to water, which is not out of the range of possibility -- especially given the drought and the general state of the U.S. Treasury. There were a few chuckles from the audience, but the more I thought about it, the more sense the idea started to make.

When I got back to the home office, I researched it. If you think a water tax can't happen, follow this link to see what slipped under the radar of California's voters...CPUC Floats $3.4 Billion Green Water Tax. Take this down the road ethanol is on and you have growers who irrigate buying and selling something like RIN credits for water. In that scenario, count on your Inputs Monitor to be on it like a dirty shirt.

Another capacity crowd attended the Independence meeting and at lunch, the brisket disappeared so fast one would have thought it was still on legs. Ammonia was on my mind. Nutrient has been falling for a few weeks now, seeking that seasonal low, but anhydrous and DAP/MAP have bucked that trend.

Part of the market pressure on anhydrous goes to expected springtime demand as a number of growers found the soil too warm for application until late in the season, and passed the application off until spring. The other factor is the high price of ammonia. DAP and MAP both rely on ammonia as a feedstock, and high prices in that market coupled with high expected springtime demand has kept many ammonia-based products from settling too far to the low.

I was pleased to receive word that, while ammonia is still high over last year, prices globally took a slight downturn, shedding as much as $20 per ton. Natural gas related infrastructure in Egypt had been a problem along with general unrest in the entire region. India has consumed an average of 30 million tons of Urea annually lately, and a lot of ammonia goes to service that demand.

But product is moving again, and the market for ammonia is beginning to show favor for upstream producers of anhydrous and phosphates. I labeled the market for N in the coming months 'uncertain at best' -- P is uncertain as well, but domestic production should keep that market in check. Remember we still have to get product moving up the Mississippi River, but the Army Corps of Engineers has been systematically dredging and blasting submerged rocks in the river's channel to get barges floating again.

The outlook for the Mississippi isn't nearly as dire as it was just a few weeks ago, and if this arterial shipping lane can support barge traffic again, the fertilizer markets would breathe a lot easier.

Chip Flory was on hand that day and as I finished my talk, I asked him how he felt it went. He said, "18 percent of what?" I knew immediately what he was talking about. 18% is the point where farmers show price resistance when purchasing nutrient. I had explained that part very well, but had failed to make clear what the 18% was a percentage of. The 18% refers to a percentage per acre of expected new-crop revenue. The formula is a little mathy, but here is this cornboy's best shot at making it clear.

Based on Actual Production History -- I use 160 bu. per acre, an average over the five prior years -- and December 13 corn futures with corn/beans basis factored in, 18% of expected new-crop revenue per acre is where growers show NPK pricing resistance. In real terms, considering Dec 13 corn is currently at $5.74, 18% per acre equals $158.11 per acre for your total nutrient package -- not including fuel, electricity or any other expenses...just NPK. Once the amount per acre reaches 18% of expected new-crop revenue, growers will generally either adjust the ratios of NP&K, or wait out the market and hope for lower pricing.

Let's run those figures one more time, figuring Dec 13 corn at $6.00. This puts 18% of expected new-crop revenue at $165.60 per acre. Based on corn futures, this should give you a suitable framework for figuring how much you should expect to pay per acre for NPK.

Two more stops remain on Pro Farmer's Profit Briefing Seminar Series. Lafayette, Indiana and Peoria, Illinois. I'm looking forward to the trip and to learning new lessons from miles and miles of Monitor. Expect a full report upon my return.