Days of Supply for Wheat

by AgWeb Staff
USDA released supply and demand data for the classes of wheat in its World Supply Demand Estimates (WASDE) for the month of December 2011. Hard Red Spring Wheat (HRSW), with its high protein, is an excellent bread making class; Durum wheat is used primarily for pasta because it is the hardest of all wheat; Hard Red Winter Wheat (HRWW) has less protein than HRSW and used for "all wheat flour" and; Soft Red Winter Wheat (SRWW) is referred to as snack food wheat as it has no protein standard recognized. 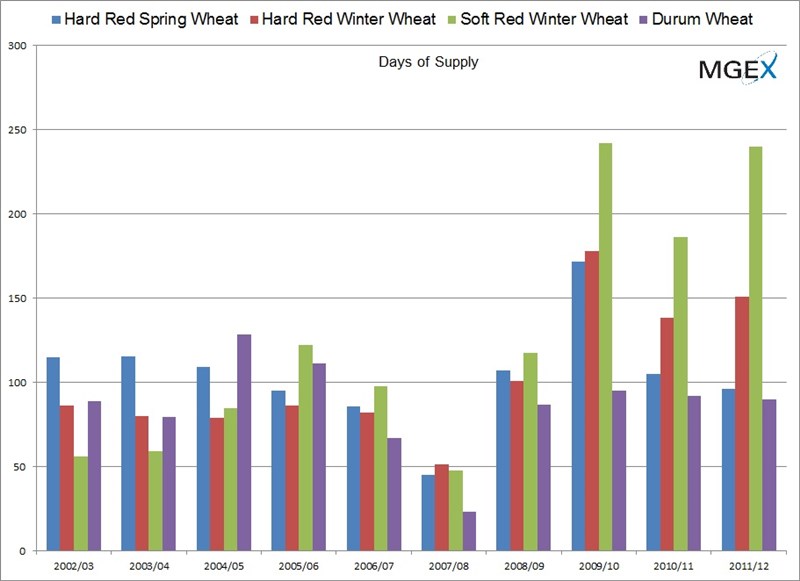 The graph shows that since 2006-2007, the daily supply of Durum wheat has been less than 100. There continues to be much less of a cushion versus the opposite end of the wheat spectrum. SRWW has a 240 day supply.
HRSW has now incurred two straight years of declining days of supply and is now
estimated at 96.
Because of the ample supply, both the SRWW and HRWW have experienced two years of increases in the number of days.
From the producer to the end user, it remains very important to use MGEX Hard Red Spring Wheat futures and options for production and usage to hedge as it can reduce risk and maximize profit potential for Hard Red Spring and Durum wheat. Not all wheat classes are the same. It is important to use the appropriate tool for the appropriate wheat.
MGEX welcomes your questions.........Joe Victor

www.mgex.com
800.827.4746
Information used to compile this update is from publicly available sources. Nothing contained herein should be construed as a trading recommendation of MGEX, its employee or its members. For informational purposes only.
keyword:
Keyword
Marketing/Communications
Archived Content
Sharing the Australian GM Cotton Story of Environmental Progress
Trump Approval Strongest Yet as He Heads to Farm Bureau Convention
Volatility Creates Opportunity
Marketing Meeting Mayhem
Where Sesame Street Dead Ends.