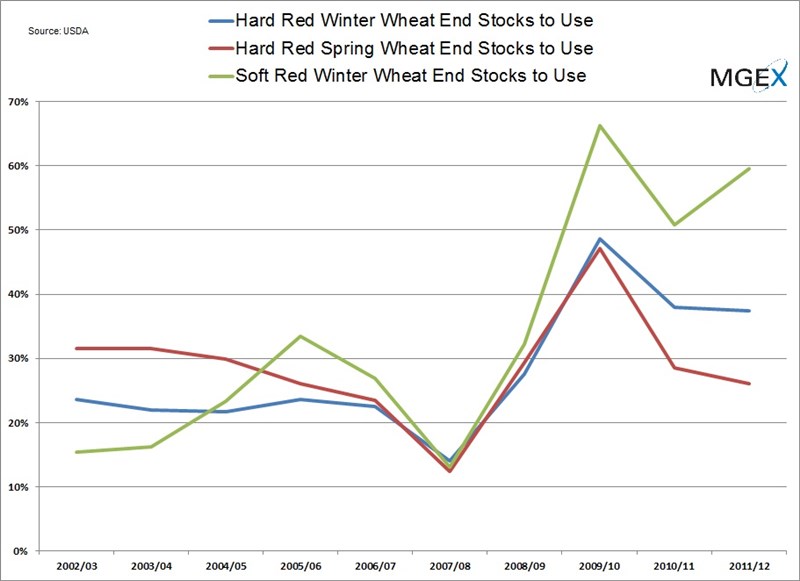 In the chart below you can see the 2007-2008 market year as the benchmark low for end stocks to use for all three wheat varieties. During that year, HRSW end stocks to use were 12 percent, with SRWW at 13 percent and HRWW at 14 percent end stocks to use. The chart shows current end stocks have increased for all three major wheat varieties but at a much slower pace for HRSW versus SRWW.
SRWW has the most end stocks to use with 60 percent. HRWW end stocks are at 37 percent and HRSW at 26 percent. The end stocks to use have been at current levels since the 2009-2010 market year.
Current exports of SRWW are 79 percent higher versus last year. HRSW exports are 5 percent less than year ago levels and HRWW exports are down 14 percent over the last year. Dating back to the 2002-3003 market year, SRWW exports have trended upwards while both HRWW and HRSW have remained mostly neutral.  However HRSW domestic consumption is trending higher since the 2002-2003 market year, while SRWI remains neutral. HRWW is the only one of the three major wheats seeing a decline in domestic consumption.
Perhaps this information is one potential reason why, since August 30, 2011, the futures spread price value for HRSW March futures versus HRWW March futures has multiplied five times over. The spread price value for HRSW March futures versus SRWW March futures has increased more than 200 percent during the same time period.
MGEX welcomes your questions.........Joe Victor