by AgWeb Staff
This Thursday the USDA is scheduled to release its time sensitive "Prospective Planted" acreage report. This report is considered one of the top three reports of the year. The other top reports are the January Annual World Agricultural Supply and Demand Estimates (WASDE) and the June 30 Acreage report.
This Thursday’s report is the first planned look at potential planted acres for major crops by the farming community for 2011. It provides a target range of the major crops that might be planted in the upcoming season. 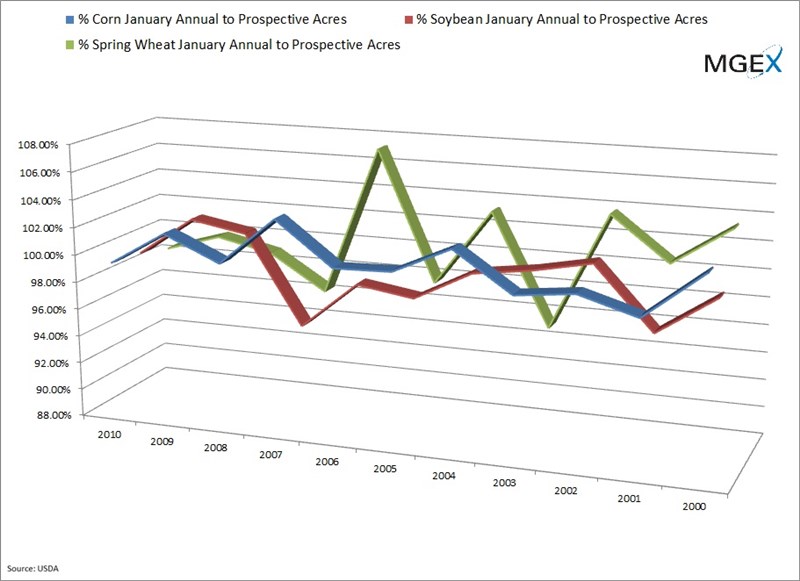 Farmers will look at rotation between a legume, such as soybeans, versus grass crops, such as wheat and corn. Farmers will include a look into the complete per acre financial status for their crops as well as the best place to sell the crops (basis appreciation).
But it goes without saying, farmers can not control world events or the weather.
Ten months from now, when the January 2012 Annual WASDE report is released, the 2011 springtime weather events will have played large role in all grains, with the greatest impact on the small geographic region in spring wheat (four states, Minnesota, North Dakota, South Dakota and Montana) versus a much larger area for corn and soybeans. Over the past eleven years, the January Annual WASDE report versus the previous year’s March Prospective Plantings report has shown an acreage planted range as low as 98.8 percent to as high as 103.5 percent for corn, for spread of 4.7%.  For soybeans, that same spread has been 7.2 percent and for spring wheat it has been 12.1 percent.
MGEX also found of the past eleven years when comparing the March Perspective Plantings report to the following year’s January Annual WASDE report, corn planted acres have declined four of 11 years; soybean planted acres have declined seven of the 11 years; and spring wheat planted acres have declined six of the past 11 years.
Looking ahead it appears the greatest volatility will be in spring wheat, followed by soybeans and finally corn.
MGEX welcomes your questions.........Joe Victor