by AgWeb Staff
With dryer than normal weather conditions in the Southern Plains and wetter than normal conditions in the Northern Plains, MGEX looked to the historical weather maps to determine if there is any other year, or years, with similar weather patterns. Several years fit the pattern, including 1996, 1974, 1952 and 1904. But 1996 was not only very similar to the current weather pattern but is also the most recent. Of course MGEX is interested in the specific year which may lead to the specific price action of the major grains during March 1, through September 30th.
Soybean price action trends sideways in 1996 with a range high of $8.382 to a range low of $7.152 per bushel. United States end stocks to use in 1996 were relatively tight at 5.4% versus the present of 4.2%. This suggest current prices may consolidate until the crop production is verified near the end of July to the beginning of August when pod fill is important. 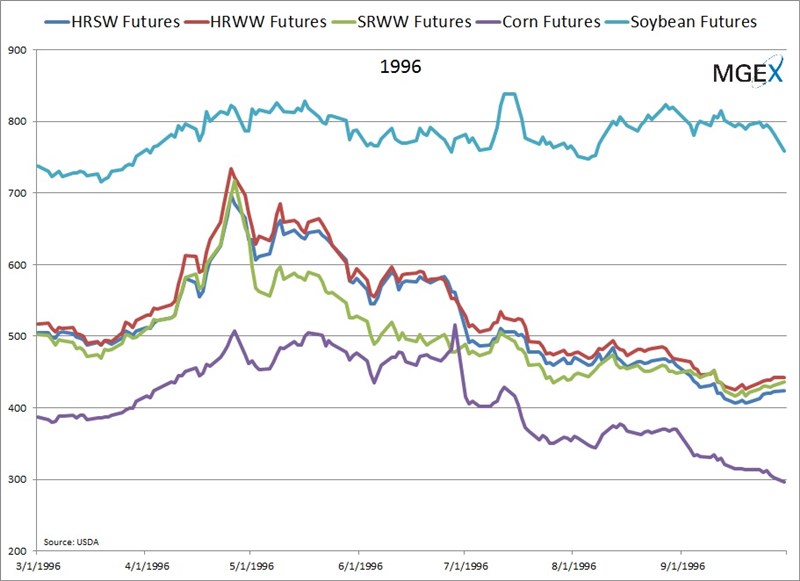 Hard Red Spring, Hard Red Winter and Soft Red Winter wheats all reached peak prices in late April, with each following a downtrend to their respective lows by the middle of September. Wheat lost nearly $3 per bushel when 1996 end stocks to use were 19.3%, versus a present level of 34%. It did not matter that Hard Red Spring wheat, the second-most produced wheat in the United States, is planted in the Spring versus the Fall planted Winter wheats.  Prices fell lower in unison.
It is difficult to predict weather more than three days out, however history may be a good teacher when looking at current weather conditions and its relationship to price.
MGEX welcomes your questions.........Joe Victor

www.mgex.com
800.827.4746
Information used to compile this update is from publicly available sources. Nothing contained herein should be construed as a trading recommendation of MGEX, its employee or its members. For informational purposes only.
keyword:
Keyword
Marketing/Communications
Archived Content
Dear Starbucks, I Think You’re Confused
This Week in PORK: Iowa Pork Congress and Feral Hogs in Texas
What We Think We Know About Section 199A
Kinze Launches New Planter Series to Provide Simplified Maintenance
U.S. CattleTrace Advances Disease Traceability