Grain and soy markets are suffering from a combined case of trade tariff blues and good weather flu this morning, and we have prices under pressure as far as the eye can see. With the exception of beans, we have not really suffered any more than what we had already experienced in the past week, so the patient is by no means beyond recovery, but I am afraid there is no quick cure for these illnesses, and it will require a longer period of suffering before it can pass.  Of course, a spoonful or two of positive news could help ease the pain, but for the next week at least, I am not sure who would be capable of delivering that kind of medication, but Dr. USDA is scheduled for a visit a week from now, and it would be about time for him to provide a little encouraging news.

We will, of course, have the weekly condition updates issued this afternoon and it seems that the trade has been focused on the minute changes from week to week. While I am not sure how widespread this has been or if it would be reflected in the weekly numbers, but I have been reading reports from central Illinois that between 45 and 65% of beans have been aborting their flowers.  This would be generally associated with plants under stress from too much heat and too little moisture, which has not been isolated to that region alone.  Certainly, something to keep an eye out for moving ahead. Outside of the far western side of the corn/bean production areas, the Midwest remains quite dry.

African Swine Fever is back in the news over the weekend, but this time, the stories come from Eastern Europe instead of Asia. During the month of July, there have been 300 new outbreaks of ASF in Romania, which is a jump from 80 in the month of June.  Neighboring Bulgaria reported 18 cases in July and Slovakia reported its first case last month as well.  Last year, Romania already culled 200,000 hogs.  Thus far, the disease has been contained to Eastern Europe and needless to say; Western Europe is doing all can to make sure it remains there.

I covered this in the weekend commentary, but it is worth reiterating again this morning as prices have continued to plunge.  Since the new threatened tariffs were announced last week, the Chinese Yuan has pushed sharply lower and this morning reached down to the lowest mark traded against the dollar since 2008.  While by no means has it broken enough to make up for the increased tariffs on imported goods into this country, but since the trade war began, it has dropped over 11%, which of course means our export products have become that much more expensive, even without the added costs of those tariffs.  Again, we continue to provide an incentive for China to not only developed trade relationships elsewhere but to invest in those same regions for the long haul. 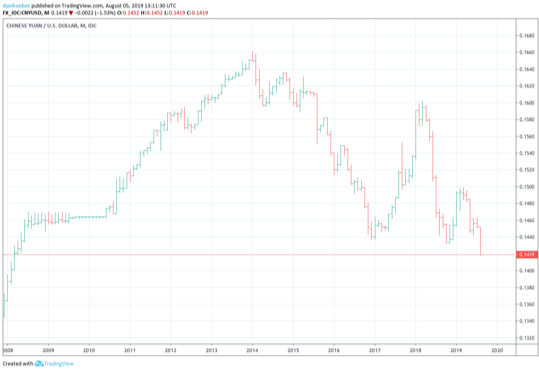