Some 2,350 years ago, give or take a decade or two, Aristotle observed and wrote: “Nature abhors a vacuum.”  (Sorry, I could not resist adding in the cartoon by Gary Larson) Of course he was postulating about the study of physics or trying to determine how the universe works, but I suspect little did he know, he was also providing us insight as to how markets would function.  It seems that markets as well, abhor a vacuum, and in this case, a vacuum would be described as a lack of news, which we seem to be experiencing this morning. It would appear that the void this has created is now being filled with lower prices. 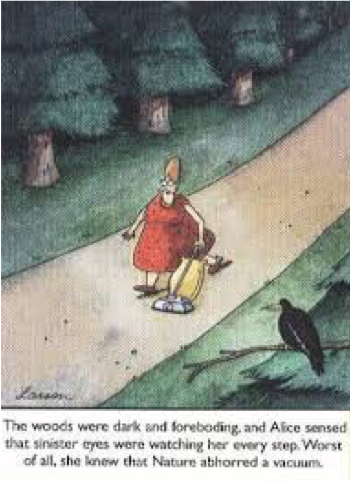 Realistically, as refreshing as the bounce witnessed last Friday was, it appeared to have been stimulated by little more than short-covering after a very harsh, and I maintain unrealistic reaction to the USDA reports, there was nothing substantial enough happening to redirect that focus of the trade to other matters, such as the fact that the majority of the corn and bean crops were planted well beyond optimum dates and in poor soil conditions in many areas.  Of course, when everything looks green at this point in the year, that is a difficult drum to beat. Neither did help that the only other topic on the minds of the trade is the U.S./China trade war and over the weekend, the President stated that “I am not ready to make a deal yet” when asked if China was ready to come to an agreement.

There is one element in the universe that could help redirect the attention of the trade, not to mention fill in a void of knowledge and that is the fact that the ProFarmer crop tour kicks off this today. Granted, there is no assurance that they will come up with results that vary significantly from the USDA but at a minimum should provide literally boots on the ground checks and balances to what was primarily a statistical report last week.  I believe the final results will be published on Friday, but there will be updates each day that undoubtedly the markets will be scrutinizing.

As I suggested last week, I believe grain and soy markets have been beaten down to levels of value once again and while there could be some more market “noise” where we try and probe into lower lows just to test the resolve of the value buyers, I suspect we will see prices turn sideways until we either a.) get a more accurate estimation of the actual crop size and/or b.) witness another disrupting weather event. For that matter, it could be a combination of both.  Of course, that could mean weeks more of sideways trade will few opportunities to do much of anything.