No Day Shall Erase You...

Today marks the 18th anniversary of the day when 2,977 men, women and children were senselessly killed on U.S. soil. It seems as each year passes it becomes less and less etched into the minds of many, and of course, there are some 70 million people in the country who were born after that tragedy and will never have any recollection of the impact it had on our nation and the world. That is why it remains our duty to memorialize the sacrifice that was unwittingly made by these individuals and to at least take a moment of silence and reflection in their honor.  Taking the quote from Virgil that greets you in the 9/11 museum in NYC, “No Day Shall Erase You From The Memory of Time.” 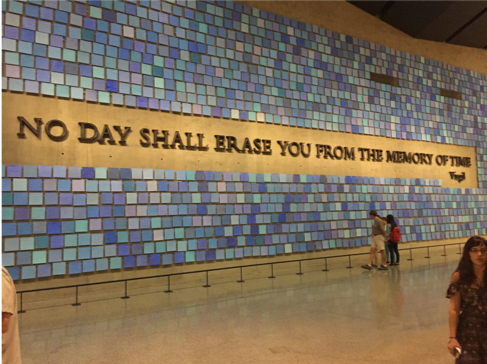 Grain and soy markets did maintain decent strength into the close yesterday, supported by the slip in crop ratings, several more solid purchases by Mexico, 278.2k M.T. of corn, 138k M.T. of beans and 195.75k M.T. of soy-cake or meal, and undoubtedly a little short-covering by spec who are heavily weighted to that side of the market.  It seems though without fresh news, and a weather outlook that should be beneficial for allowing crops to mature, we failed to generate any additional buying overnight.  That said, I believe the strength thus far this week, particularly in the wheat market, is telling us we have reached our seasonal/cycle lows, and value and end-user buying should show up on pullbacks.

Brazilian planters should be set to roll, but so far, farmers have been hesitant to move due to dry conditions.  It is almost ironic that they are confronting just the opposite conditions that we here in the United States experienced back in the spring, but that almost makes sense seeing they are on the other side of the equator. Water does drain counterclockwise down there.  Granted, it remains early, but there does not appear to be much promising moisture in the forecast at least until late month.

That was about the only price positive news from South American overnight because the other story is that Argentina and China have inked a deal to begin exporting and importing meal.  Traditionally, China preferred to import beans to support their domestic crush operations, and Argentina is positioned to export meal, which limited the business between the two.  Needless to say, this is one more long-term ill effect of the trade war.

With the next U.S./Chinese trade talks tentatively scheduled for early next month, there are more rumors of the willingness purchase more U.S. ag products to help grease the slide, so to speak.  If we had not heard this so many times before, only to have thing scuttled at the 11th hour, it would be easier to become excited about the news.

Tomorrow will bring us the September report, and as I have mentioned before, it is difficult to look forward to it with anything but a jaundiced eye.  Nevertheless, here are some preliminary trade survey estimates; Domestic corn production is expected to come in at 13.672 billion bushels from an average yield of 167.2 bpa.  This compares with the August numbers of 13.901 billion and 169.5.  Bean production is estimated to total 3.577 billion bushels with a yield of 47.2 bpa.  In August the USDA came up with a crop of 3.68 billion from a yield of 48.5. 2019/2020 ending stocks are expected to total 2.002 billion corn, 660 million beans, and 1.016 billion wheat, compared with 2.181 billion, 755 million and 1.014 billion respectively for each crop last month.