Not ready for prime time

The crop tour inspired buying that provided the corn market with a touch of optimism yesterday morning was just not enough of a shot of courage for the bulls to sustain higher prices throughout the day. In fact, it appeared that after reinforcements failed to arrive, those early buyers thought it best to attempt a speedy retreat and we ultimately ended up posting and outside lower daily reversal. While such action may sound somewhat ominous, and it would be after a market had been on an extended rally, but when it occurs after having experienced a beat down the likes of which we have experienced over the past two and one half month, it is often more indicative of that final exhaustion moment that can often complete the move.  Now, I am not ready to say the strength we have experienced this morning is going to strike any fear in the hearts of the bears but the fact that we did not extend immediately lower today should suggest the action is little more than the typical market “noise” that is witnessed when you reach the completion of a bear trend.  Soybean fared just a bit better than corn yesterday, although they closed toward the lower end of the range.  Granted, this market also remains towards the low end of trade for the past several months but has certainly not be punished to the extent the corn market has. Ironically, part of the reason could be the simple fact that beans never really attracted the upside interest either so there were fewer bulls to disappoint. 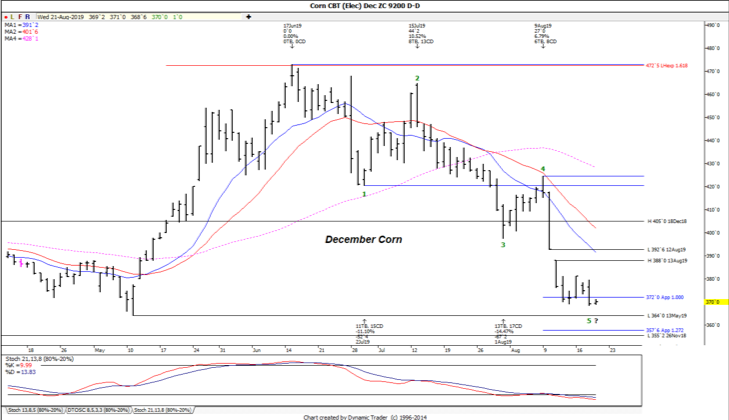 This morning, as was the case yesterday as well, the support appears to stem from the ProFarmer tour results.  Not unexpectedly the updates from east of the Mississippi reflect more crop problems than west.  The Indiana corn yield estimate came in at 161.46 bpa, which if realized, would be 11.4% below last year and 8% below the 3-year tour average.  Bean pods counts came in at 923.94, down 30% from a year ago. The estimates from Nebraska were not down as dramatically but still below a year ago.  The corn yield was pegged at 172.55 bpa, down 3.7% from last year but still 2.9% above the 3-year tour average.  Bean pods counts tallied 1210.83, down 6.8% from a year ago and down .5% from the 3-year average.

Evidently the displeasure from the ag community concerning the official changes for biofuel blending exemptions has finally reached the White House, which supposedly came as a surprise to some there.  I guess some must have felt the MFP payments to ease the burden of trade tariffs would have kept everyone happy.  Regardless, it was reported to have been a topic du jour yesterday but, that I am aware of, no change in the policy appears imminent. The fact that we are entering an election year could be the saving grace for the ethanol industry.

Weekly exports sales will be released tomorrow morning and while they have certainly been nothing to write home about as of late, but we have witnessed a little more action in the daily updates.  This morning the USDA announced a sale of 328,000 MT of corn to Mexico for the 2019/20 crop year.