Unfortunately for any who have been or are in the path of Irma, it has been the major point of concern this week and for those in Florida and points north from there, will be over the next 24 to 36 hours.  Beyond the havoc this seems sure to inflict on Southern Florida, seeing that it is forecast to head directly north with heavy rain pushing as far north as Tennessee, it is likely to at a minimum complicates harvest activity and potentially inflict crop damages as well.  Our prayer of safe keeping goes out to all those in harm’s way this weekend. 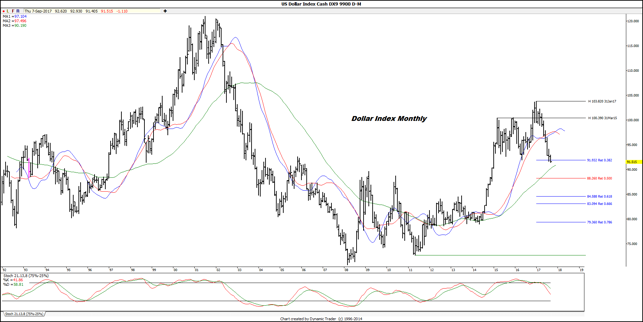 While it would appear to be a combination of Irma, Washington budgetary concerns and the ever-present danger from the childish tyrant in North Korea, note that the US Dollar has continued to descend and this week we have reached down to the lowest point traded since January 2015.  On a daily and even weekly position, this index is quite oversold, but when viewed from a monthly perspective it would appear that we have the potential to continue generally lower and for the commodity industry as a whole, that is good news.

While I would like to believe the lower trend in the dollar is responsible for at least a portion of the bean demand, we have witnessed this year, but realistically the 800-pound demand-gorilla in the room continues to be China.  During the month of August, that country imported 8.45 MMT, which was 16% lower than the 10.08 they received in July but the number was still 10% ahead of a year ago, and that July figure was the largest monthly number recorded since 2010.