Barely a week ago, it appeared that hedge funds were on the wrong side of the ledger and with concerns about the cold and wet early spring was going to be enough to show them the “error of their ways” in the grain and soy markets. Obviously, all it did was give them an opportunity to add to shorts.   Be that as it may, looking at the calendar, I continue to believe they will have a difficult time pressing prices and possibly with the exception of beans, we should remain contained within existing trading ranges.

It has been a little while since we have looked at the CRB Index and it is worth pointing out that over the past couple weeks, it has rallied to the highest levels traded since late last year.  Thus far we have been stopped by the 55-week moving average, which also capped the index last October but the weekly MACD has turned positive once again so bulls should have some wind at their backs.  Even if we do extend higher that would not assure buying in the grain/soy markets but should attract additional investment money.  Once again, we can site the old adage that a rising tide lifts all boats. 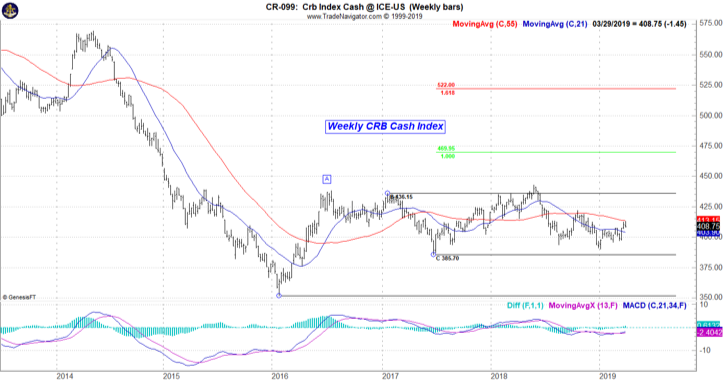 Reuters reported this morning that in the Shandong province of China, which is one of the largest pork producing regions, the breeding herd has dropped 41% in the past seven months due to the ASF.  This would appear to be a much larger cut than “official” number but sounds consistent with the estimates I have heard from private sources.  Do keep in mind that the issue has probably given them an opportunity to fill cold storage as when ASF is found on a farm, they simply go in and slaughter the entire facility but longer term, this could create a void.  I was told that in some commercial facilities, pits were being filled and chickens are now occupying the space as that will enable them to get meat to market quicker.  Would seem to be a fine plan as long as the next issue is not Avian Flu.  Of course, regardless if it is chickens or empty buildings, this does not paint a pretty picture for the demand for feedstuffs.