Right in the gut

Boy, talk about a kick right in the solar plexus of the corn market.  Negative stocks estimate, negative acreage, and they might as well have added in we think your sister is ugly too.  To try and keep the damage in perspective though, with the price damage incurred we have just returned to the same level that March corn pushed down against before expiring last month, which is basically the 50% retracement point of the range that we have established over the past nine months. Now we begin the rebuilding process all over again.  Where there may still be a lingering bad aftertaste in the month of some this morning, I continue to believe we have at least two things in the corn market that provide hope for a better tomorrow; the time of the year and the sizable short position of the hedge funds.  With the risk of the entire growing season sitting right in front of us, it is difficult to imagine we will not see some type of weather scare the will prompt short-covering.  Add to this the likelihood that there will be a new U.S./Chinese trade agreement, and while that may not hold anything that would be corn specific, it would be psychologically positive for all commodities. 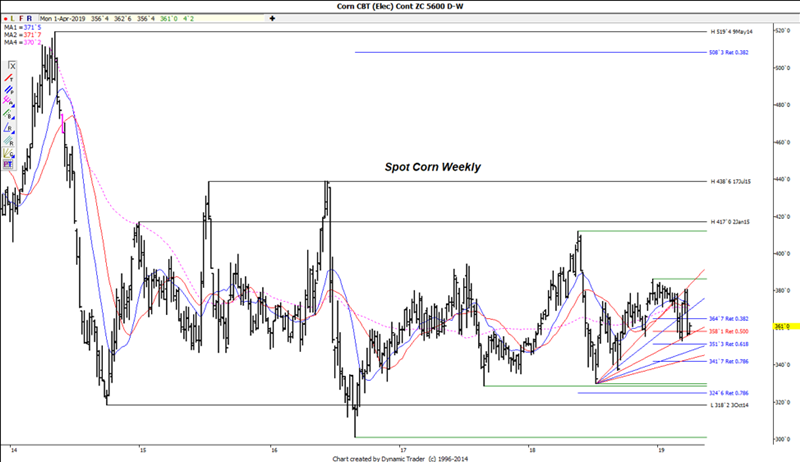 There will, of course, be another supply/demand report issued on the 9th of this month, which will reflect the larger corn inventories, but we should see the focus of the market gradually turn to planting progress and conditions.  Realistically, the acreage numbers issued last Friday have been discounted by the trade as those were based on March 1st surveys and we know all too well about the flooding issues in Nebraska and surrounding states and well as what appears will be a late start for much of the Midwest.

Macros are leaning a bit to the positive side for grain/soy as we begin the month.  Metals are a smidge weaker but energies are higher, and the dollar is lower.