What is this Big Move in Corn Spreads Telling Us?

TRADING COMMODITY FUTURES AND OPTIONS INVOLVES SUBSTANTIAL RISK OF LOSS AND IS NOT BE SUITABLE FOR ALL INVESTORS. YOU SHOULD CAREFULLY CONSIDER WHETHER TRADING IS SUITABLE FOR YOU IN LIGHT OF YOUR CIRCUMSTANCES, KNOWLEDGE AND FINANCIAL RESOURCES.

The July corn - December corn spread, otherwise known as the old crop - new crop corn spread, has narrowed over 47 cents in the last eight trade sessions.  This is a big move as far as a spread is concerned, and it comes at a very interesting time.  So, what is causing this move in the spreads and more importantly, what does is this telling us?

In grains, bull spreads and bear spreads get a little more complicated because we grow a crop every year and fundamentals can differ from one marketing year to the next.  A july - December spread is called an old crop - new crop spread because July corn is corn that was grown last year and December corn is corn that will be grown this year.  They are connected however because of the amount of grain that is carried over from one year to the next.  If there is a shortage of grain one year, but the prospects for next years crop are good the July will hold a large premium over the December.  On the other hand, if there are large stocks one year and concerns about new crop production then July will hold much less premium over December.

The second example above is one way that the traditional bull spread concept can be an issue in the grains.  But, even if we have large grain stocks for one year but are worried about the next the old crop will still rally with the new crop because while we are preparing for a short crop the next year we put more premium on the grain that will carry over from one year to the next.  In fact prices will go higher in order to dampen demand so that the amount of carry over is maximised.

So, knowing this lets look at the current situation.  There was a major drought year in the US last year, so corn stocks are on the tight end of the historical spectrum.  The outlook for next year was that we would have a giant crop on record acreage but too much rain lately has caused concerns that some corn will not be planted therefore causing concern for production.  This certainly could be a set up for a rally, and in this scenario we would expect the new crop deferred contract to rally, maybe even take the lead but given the tight stocks and the need to preserve carry over old crop should follow.

In the last 8 days we have seen this concept break down.  As concerns about getting the corn crop planted in time have mounted December corn has rallied almost 60 cents off of lows.  In the mean time old crop July corn has not only not been able to keep up in the rally it has actually lost ground.  This is a very strange situation.  It is certainly conceivable that this is a situation that December should gain, but it is hard to justify the complete opposite movements in the two contracts and the huge move in the spread in a short period of time.

Looking forward this could mean one of two things.  The first possibility is that the old crop July corn contract will be looking to play catch up in a big way on a continued rally.  In this case a traditional bull spread will make a comeback and work well.  The second possibility is that the recent rally off lows in new crop December corn has a different agenda.  By that I mean it is possible that December corn rallied not because of concerns of a tight stocks situation for next year, but for a different reason such as motivating corn producers to do whatever they can to get the corn planted this year even if it means planting late.  In many of the unplanted areas late planting is a risk at this point.  In northern areas there is a risk of loosing production to an early frost.  If this is the case this most likely would not be an extended rally.

The bottom line is that the big move in the July - December corn spread in the last 8 days is not usually a sign of an extended rally.

If you are looking for ideas or want to talk strategy feel free to give me a call or shoot me an email, you will find my contact info below. 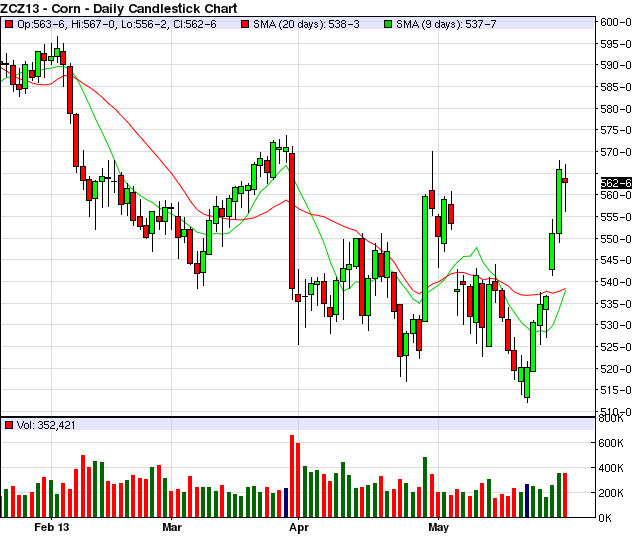 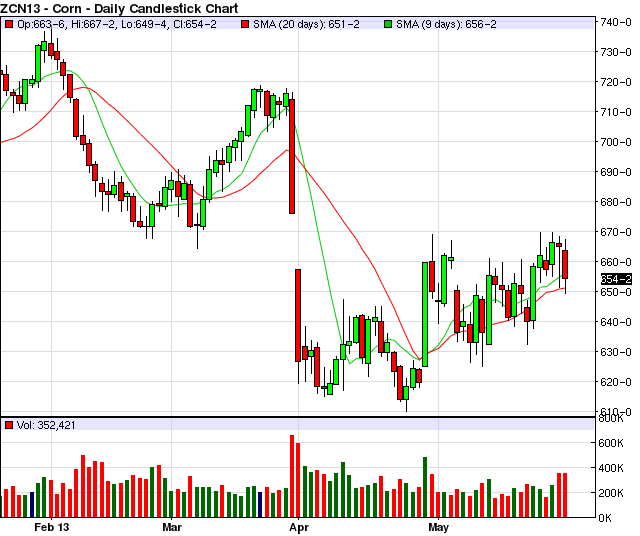 All this means that speculators should be looking for opportunities and producers need to look to lock up some prices while we have corn near $7.00 and soybeans near $14.00. Give me a call for some ideas. In particular, producers looking to hedge all or a portion of their production may be rather interested in some of the options / options-futures strategies that I am currently using.

Please check out my Blog at: http://tedseifriedfutures.com/

Futures, options and forex trading is speculative in nature and involves substantial risk of loss.  This commentary should be conveyed as a solicitation for entry into derivitives transactions.  All known news and events have already been factored into the price of the underlying commodities discussed.  The limited risk characteristic of options refers to long options only; and refers to the amount of the loss, which is defined as premium paid on the option(s) plus commissions.