The total return from farmland moderated further through midyear for pension funds, according to the Farmland index compiled by the National Council of Real Estate Investment Fiduciaries (NCREIF). The total return for the quarter was 1.16%, comprised of 0.53% appreciation and 0.64% income return. It is the lowest total return since the third quarter of 2010. The second quarter 2015 total return trails performance from the previous quarter (2.08%) and the same quarter a year ago (1.73%).

As seen below, total annual returns for farmland were in the 5% to 10% range prior to the 2001 recession, and then experienced a considerable escalation in the 2004 to 2007 housing boom. The financial crisis pulled down total returns through 2010, but never below 5%, and the ensuing recovery saw annual returns rise above 20%. Although the expansion has matured, total annual farmland returns of 11.65% for the period ending in the second quarter still represents a healthy performance by historical standards. The annual return was driven by a strong income return of 7.53% with appreciation of 3.93%, NCREIF reports. 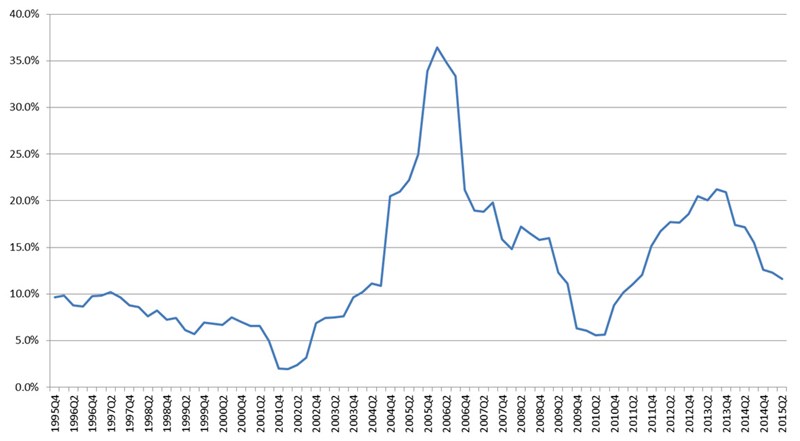 The Mountain States emerged as a new leader for total farmland returns in the second quarter, outpacing the Pacific West with a 2.93% total return. This outperformance was tied to the appreciation return, which was highest in the Mountain States at 2.03%, NCREIF states.

The Pacific West was the only other regions with a positive appreciation return, says NCREIF. Second quarter performance in the Mountain States represents an improvement over the previous quarter (2.40%) and the same quarter a year ago (1.61%). The Pacific West had a 1.54% return with 1.28% appreciation and a 0.27% income return. Pacific West returns are generally strongest in the fourth quarter, when income is realized from the sale of crops. Due to a strong close to 2014, the Pacific West still leads all regions on an annual basis with a total return of 22.43% for the year]ending in the second quarter 2015.

The NCREIF Farmland Index consists of 630 investment-grade farm properties, which is comprised of 404 annual cropland properties and 226 permanent farmland properties. The index includes 205 properties in the Pacific West, 166 in the Corn Belt, 69 in the Delta States, 55 in the Pacific Northwest, 47 in the Mountain States, 34 in the Lake States, 30 in the Southeast and 21 in the Southern Plains. This data enhances the ability of institutional investors to price the risk of farmland investments across the United States.