The rural economy continued to improve in June, although bankers expect the flooding to have negative impacts and the local economy and tourism. Farmland prices remain strong and well above growth neutral, but the farmland price index dropped to its lowest level since October of last year.

The overall Rural Mainstreet Index (RMI) increased to 56.0 from 54.9 in May, according to the survey of bank CEOs in a 10-state region. June’s reading marks the eighth straight month the index is above growth neutral 50.0, but slightly below the reading of 59.4 last May. 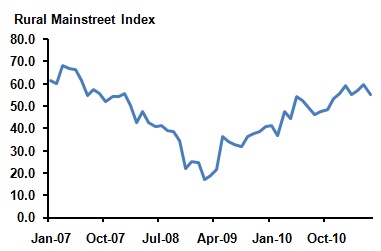 “The Rural Mainstreet economy is expanding, I expect flooding and weather related issues to slow growth in the months ahead,” said Creighton University economist Ernie Goss, co-author of the report.

Farmland prices remain above growth neutral for the 17th straight month, but the farmland index continued to slip to 62.0 from May’s 75.0. Bankers are concerned that a large drop in commodity prices could have a negative effect on farmland values and one-third of respondents noted that outsiders were the primary buyers for farmland.

Bankers also expressed concern regarding the impact of the Missouri River flooding on the economy. Larry Winum, president of Glenwood State Bank, noted, “The current and potential flooding problems will certainly have an adverse economic impact on sectors of agriculture, business, and on our communities along the Missouri River. A sad situation for a lot of people.”

The farm equipment sales index declined slightly to 63.1 from 65.9 in May, but still well above growth neutral. “We are beginning to see some of the air exiting the farmland price bubble. In my judgment, this is not a bad outcome. A significant upturn in the value of the dollar stemming from the European debt crisis could drive the dollar higher and agricultural commodity prices lower. This would weaken farm income growth and take even more of the air from the bubbles we have been seeing in farmland and farm equipment sales,” said Goss.

Loan volumes increased in June to 59.0 from a reading of 55.5 in May and checking deposits improved to 59.7 from 58.2 in May, although certificate of deposits decreased to 41.7 in June from 44.6. Bankers also noted they are concerned about farm production, inputs, and land prices, but this is fairly typical at this point in the production cycle.

The rural economy continues to add jobs for the seventh straight month, but the jobs index declined to 51.5 in June from May’s 54.2. “The pace of job growth for the Rural Mainstreet economy is more than double that of the urban areas of the region. While the growth is still less than what you normally see in a recovery, it has been trending up for most of 2011,” said Goss.

Rural bankers continue to expect sustainable growth over the next six months in the rural economy, although the economic confidence index decreased to 55.3 in June from May’s reading of 63.7. “Even though confidence remains fairly robust, flooding and other weather related issues in areas of the region eroded confidence among some of the bankers,” noted Goss.

Please visit http://farmlandforecast.colvin-co.com for daily articles on farmland and agriculture.