The farm economy remains under pressure, with several key indicators showing farmers are facing financial strain. But, a few positive factors could help support credit conditions in the future.
( AgWeb )

The farm economy remains under pressure, with several key indicators showing farmers are facing financial strain. But, a few positive factors could help stabilize or support credit conditions in the future,  according to the latest survey from the Federal Reserve Bank of Kansas City.

“The Tenth District farm economy remained weak in the second quarter of 2019, but farm income and credit conditions showed some signs of stabilizing,” according to Cortney Cowley, economist and Ty Kreitman, assistant economist, for the Federal Reserve Bank of Kansas City. “Despite extreme weather and flooding in parts of the Tenth District and continued trade uncertainty, higher corn prices and trade relief payments could have contributed to a slower pace of decline in expectations for farm income and credit conditions.”

Although farm income was still expected to decrease in the third quarter of 2019, the pace of decline was expected to be the slowest since 2014. In addition, bankers reported deposits grew at a faster pace in some states while farmland values remained steady.

Here are the highlights of the Second Quarter Survey of Agricultural Credit Conditions from the Federal Reserve Bank of Kansas City:

Farm Income: While farm Income remained weak in the second quarter, the pace of decline slowed. Slightly more than 40% of bankers reported that farm income was lower, compared with almost 75% and 60% at this time in 2016 and 2017, respectively. Following a nearly 20-year low in 2016, the pace of decrease in farm income has remained relatively stable since the end of 2017.

Credit Conditions: Demand for agricultural lending in the District remained high, but bankers anticipated slower growth in future months. Bankers anticipated a slower pace of increase in loan demand than in the current quarter.

Similar to trends in farm income, the pace of decline in credit conditions also showed signs of stabilizing in the second quarter. Slightly less than 30% of bankers reported that farm loan repayment rates were lower, compared with almost 50% and 40%, respectively, at this same time in 2016 and 2017. Moreover, bankers expected farm loan repayment rates to decline at the slowest pace since 2014 in the next quarter.

Repayment Problems: The portion of farm loan portfolios with repayment problems remained steady from a year ago. Since 2017, nearly 30% of all loans volumes in the District have experienced issues with repayment. The recent boost to farm revenues from crop prices could improve short-term cash flow and repayment ability. However, another recent survey showed that several years of depleted working capital and carryover debt has increased the need for debt restructuring and weighed on debt-service capacity of some farm borrowers. 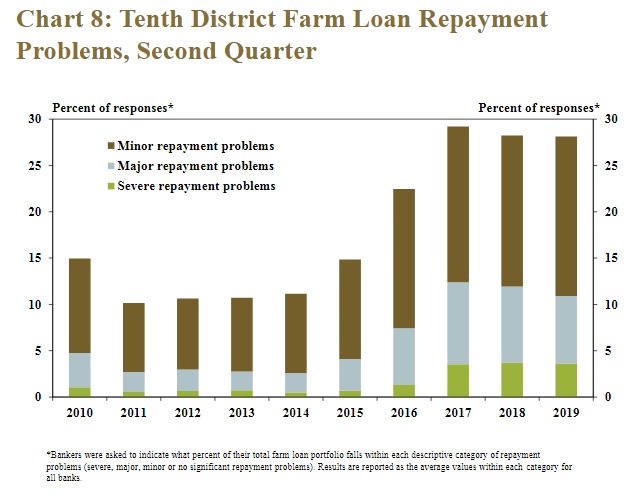 Farmland Values: Farm real estate values across the District were nearly unchanged from a year ago in the second quarter. The value of all types of farmland declined modestly in Nebraska and increased slightly in all other states except the Mountain States. Ranchland values exhibited the largest changes, declining 7% in Nebraska and increasing 7% in western Missouri. 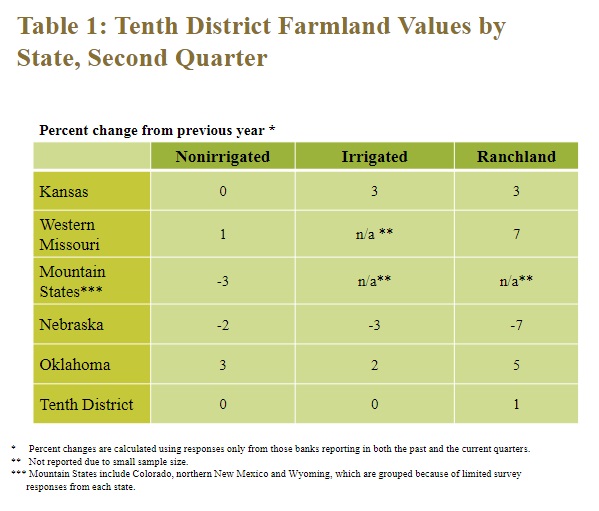 A total of 181 banks responded to the Second Quarter Survey of Agricultural Credit Conditions in the Tenth Federal Reserve District—an area that includes Colorado, Kansas, Nebraska, Oklahoma, Wyoming, the northern half of New Mexico and the western third of Missouri. Here are a few of their comments.

Tags:
Land
How to Manage Weeds in 2020
Morning Market Audio 2/24/20
Coronavirus Fears Grow as It Rapidly Spreads to Other Countries
Signal to Noise: Trump Says Probably to MFP 3.0
Surprise! - IRS Guidance is Lacking