For more than 20 years, biotechnology has allowed farmers to use herbicides to control weeds in an easier, chemical-driven process. However, the days of perfect weed control with chemical methods are long over and it’s time to take some of the weight off of herbicides’ shoulders.

“We need to do a better job of managing the weed seed bank,” says Bob Hartzler, Iowa State University Extension weed scientist. “Herbicides have been so effective the past 20-30 years that we sort of lost our focus on that and allowing that weed seed bank to increase is what drives that resistance engine.”

More weeds mean more work for farmers, and the herbicides used to control them.

“Whatever we can do to reduce the number of seeds that go into that seed bank has huge long-term dividends,” he continues. “[Tactics such as] cover crops and harvest seed destruction will prolong the use of those herbicides.”

The thick bed of plants spread over a field using cover crops not only warms the soil, increases water holding capacity and boosts biological activity—it can suppress problem weeds, too. For some farmers, this can lead to reduced reliance, and money spent, on herbicides.

“In soybeans we’ve found if you get a decent cover crop it can help a lot from a pre-emergent standpoint—it really cuts the number of weeds you’ve gotta fight,” says Larry Steckel, University of Tennessee Extension weed scientist. “It cuts down the number of palmer amaranth that come up by 50%. You’re exposing fewer of the Palmer amaranth to the post emergent herbicide which can really extend the life of them.”

The math is simple, really, more emerging weeds means more opportunity for escapes, or resistance to sneak through post-emergent applications. When either of these scenarios occur, your weed seed bank is bolstered and future crop years, and herbicides, are under greater pressure.

Cover crops do take research, however. Work with seed suppliers to outline your goals for the cover, what your cash crop is to follow the cover and other management styles to fit the species and variety mix to your fields.

“One of the biggest problems with them, and it’s a huge problem in cotton, is getting a crop stand,” Larry says. Cover crops might keep the ground a little cooler in the spring and hold water longer—which is great in a drought, but it can be problematic in wet years.

As you’re preparing for harvest you might see some unpleasant sites across your field. Maybe it’s shattercane, waterhemp, Palmer amaranth, giant ragweed or any number of other tall, problem weeds poking through the corn or soybean canopy. These weeds not only create headache during harvest, they’re producing hundreds, to hundreds of thousands, of seeds.

What if you could add an attachment that costs less thank $100,000 to the back of your combine that destroys those seeds? The Harrington Seed Destructor, created in Australia, shows new promise for harvest weed seed demolition.

“We really didn’t know how effective they could be [before testing],” says Aaron Hager, University of Illinois Extension weed scientist. “The take home story, they’re very effective, depending on weed species you can expect 90% control.”

The goal at the University of Illinois was to show proof of concept, which they did, to attract the ag machinery industry to find a way to either offer these as a combine upgrade or retrofit them onto existing combines.

“We know these technologies can work and I think the machinery industry is looking into these options,” Hager says. “[In fact, in testing] we actually had to reduce the amount of preemergent herbicides we were using because our weed populations were so low. Proof of concept is there, and this could be a component that we integrate into a system to reduce the weed seed load at the end of the year.”

Ultimately whatever method you choose consider the risks. If you rely on herbicides alone, resistance pressure will be greater. Cover crops might have risks associated with termination and cash crop planting that will need to be managed and the Harrington Seed Destructor has an added cost that needs to be considered. In addition, tillage, biologicals and other non-herbicide weed control options will have pros and cons, too.

Examine your management style and find what works best for you in a systems approach to weed control.

“Limiting the spread of weed seeds in the field will be important in the near future—we’re limping along with herbicides [alone], but how much longer we can do that I’m not sure,” Hartzler says. 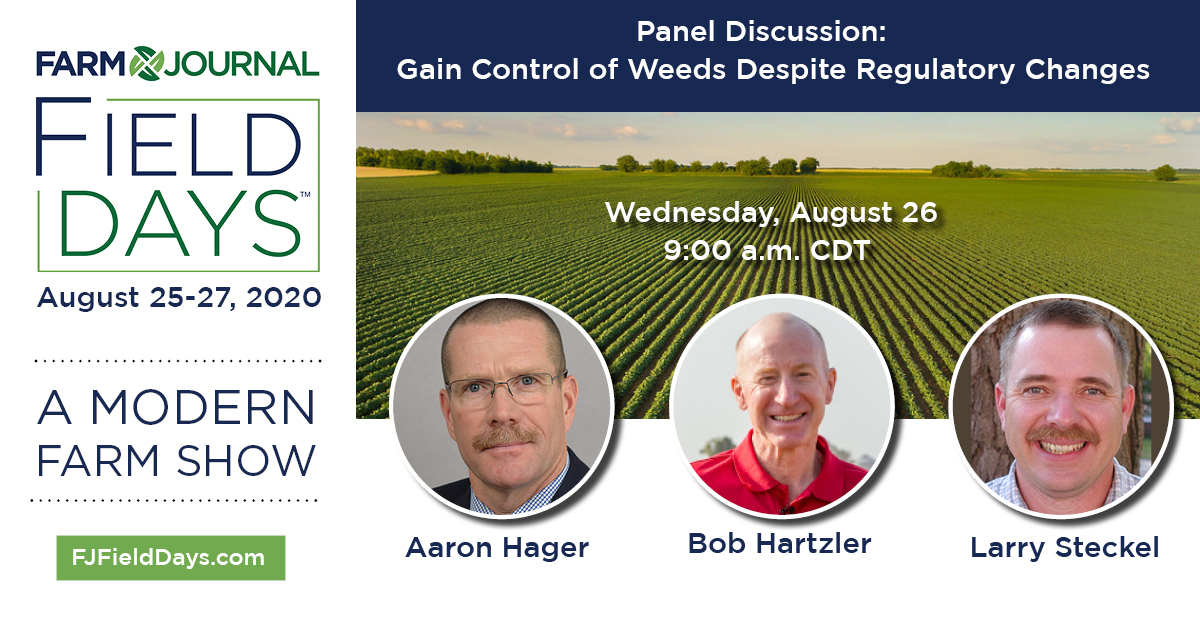 To learn more alternative weed control methods, what’s going on with dicamba, what weeds are putting pressure on herbicides and more tune into the #FJFieldDays Weed Control Panel. Starting at 9:00 Aug. 26, Aaron Hager, Bob Hartler and Larry Steckel join in an engaging conversation about the future of weed control and herbicides. This 45-minute session is sure to spark ideas and questions, register today at FarmJournalFieldDays.com.