John Phipps: Is Agriculture Feeding a Growing or Declining Population?

Is agriculture working to feed a growing population or a declining population? John Phipps looks at a possibly "baby bust" in John's World.
( MGN )

The gold standard for population growth statistics, especially for the world, is the UN. And this is the chart that many of us have lodged in our minds as the most likely outcome. The line to watch is the red one in the middle – the median projection after thousands of computer model runs. While it has been revised minutely over the last few years, the numbers are essentially the same as when I first saw it years ago. It is the source of all those alarming articles about TEN BILLION PEOPLE that often appear in farm media, along with questions about how will we ever feed them? Note it shows a global population in 2100 of about 11 billion and still increasing slowly. 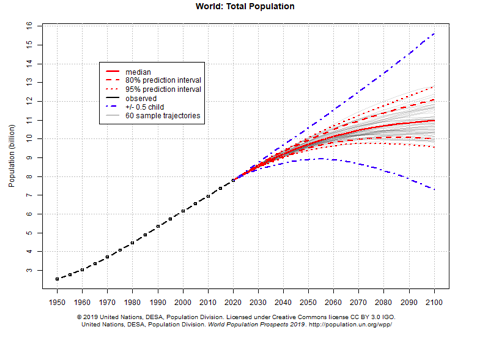 However, multiple other studies have tried to get a better picture of the falling birth rate in recent years. All over the world, even in Africa, women are having fewer children and many countries are already declining in population, notably Japan, Italy, and much of eastern Europe. The Lancet, the leading medical journal in the UK, published an extensive study that integrated this unexpected and precipitous fertility decline into population projections. They also identified two major factors that drive this decline: access to contraception and education of women, both of which are rising.

The result looks like this. Similar to the UN chart the most likely curve is the blue one in the middle, but if you dig into the report, there is this more immediate effect: if both education and contraception become widely available by 2030, which is plausible, the lower curve is the best or worse case depending on your point of view. In other words, they make a strong case for population peaking in 2064 or as early as about 2040. And not at 11 billion but slightly more than presently – just under 9 billion. 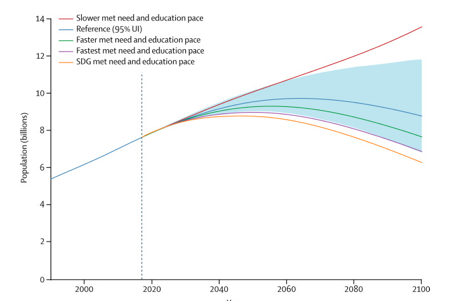 This report is one of many to encourage us to rethink our lifelong belief in a population explosion while ignoring the more likely consequences of population decline globally. Next week, I’ll look at projections for individual countries, speculate on what the COVID pandemic might mean to the birth rate, and look at why it matters for farmers.