Marijuana Farming Is Now For US Agriculture 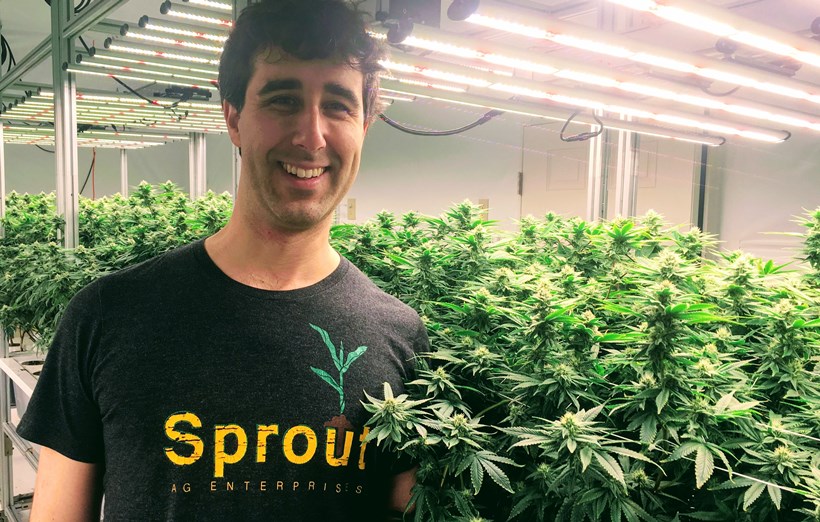 J.F. Foster doesn’t drink or smoke, but the Missouri-born farmer is about to churn out 20,000 lb. of marijuana per year.

The age of marijuana farming in the U.S. has arrived, although most farmers are caught on the sidelines. As individual state cultivation barriers topple at a dizzying pace, U.S. agriculture’s billion-dollar dance with marijuana has begun and there will be no strike of the clock at midnight.

“I’ve got 1,500 acres of normal row crops and 400 head of cattle,” Foster says. “If it was possible I’d turn my entire operation over to some type of cannabis production today. Every acre. Today.”

Foster says the coming arrival of outdoor cultivation translates to big opportunity across the agriculture industry. “We are already seeing huge investments by very well-known and established companies in big ag,” he explains. “As farmers, we’re all tired of trying to maintain profitability with current commodity grain prices and we’re trying to diversify to keep up in today’s market. Indoors or outdoors, farming heads should be turning at marijuana opportunity.”

Marijuana is not only the fastest-growing industry in the U.S., but its statistical rate of growth is unparalleled in U.S. history, according to Nic Easley. As opportunity unfolds and copious amounts of competitors vie for a foothold, the market has echoes of the boom-and-bust Silicon Valley in the late 1960s. Easley, raised on the dirt of a Wisconsin farm, says marijuana is ripe for large-scale agriculture, with a need for meticulous cultivation, safety standards, quality control and best management practices.

Easley is the founder of Comprehensive Cannabis Consulting (3C), a Colorado-based company working in all sectors of the industry: cultivation, extraction, retail, analytical laboratories and beyond. “No federal organization has the ability to provide the guidance this industry requires,” he explains. “Everything is run on a state-by-state basis and that’s why you see so many failures. That’s also why there’s so much opportunity for U.S. agriculture. Within the marijuana industry, there aren’t many people with ag experience.”

Marijuana production contains an element of organized chaos because every state follows distinct rules and testing requirements. Presently, 29 states allow medicinal marijuana growth and 8 states allow recreational marijuana growth, but many more state legislatures are sprinting toward the gargantuan green tax cow. With phenomenally high tax revenue flowing into state coffers, the feds won’t be getting the cow back in the government barn. For example, the 2014 legalization of adult-use marijuana in Colorado hauled in more than $500 million in tax revenue. Depending on population, marijuana tax values to given states could reach $300 million to $400 million per year.

Foster is a renowned businessman, with a host of ventures beyond agriculture. Ear to the ground, he heard the rumblings of marijuana industry expansion in 2015, and began a rigorous stretch of due diligence, eyeballing several hundred grow sites in multiple states. Almost 2,000 miles to the west of Missouri, he found a seam on the West Coast.

“California and Colorado already had plenty of marijuana structure. Washington was a burgeoning market and a great fit,” Foster recalls. “People in agriculture sometimes wait around to see which guy will jump out of the plane first with a new type of parachute. I’m that guy.”

Compliance is a heavy factor in Foster’s marijuana production. Seed to sale compliance systems put in place by Washington state law require testing for every 5 lb. of product: potency, mold, cannabinoids and medicinal value. “We have built our team, facility, processes and our foundation to work closely with all sectors from public awareness to government policy to make this a smooth and professional transition for everyone involved. The main objective is a safe product going to the market for consumers, be it medicinal or recreational,” Foster says.

Medical Piece of the Pie

Foster is already considering expansion as more states open legal doors. He anticipates Missouri access in 2018 and eventually he would like to grow marijuana in up to 10 states. “The marijuana industry is an evolution; it will scale and sustain. To each his own, but recreationally Americans drink a ton of beer and smoke a ton of weed. That’s prior to even addressing the huge medical piece of the pie,” he says.

Curt Livesay, certified crop adviser and owner of Dynamite Ag, carries a reputation as an agricultural maverick and says medical marijuana benefits remain untapped. “There is so much more the plant offers medicinally that nobody is dealing with. Farmers will be the ones to peel back the layers of medical marijuana.”

Foster’s cannabis vision ultimately rests on the medicinal value of marijuana: cash flow from the recreational side, followed by a full-bore push into medicinal benefits. Plainly spoken, Foster says medical marijuana is his greatest driver: “If anybody can tell me they can’t appreciate the medicinal value of what’s coming out of this plant that can help reduce the number of grand mal seizures a small child has each day, or someone suffering from the pain of chemotherapy, or calming a veteran battling PSD that fought for our country, then they can kiss my ass.”

Livesay says there is no pencil comparison between the margins of marijuana and traditional row crops. Marijuana is typically sold in grams (453.6 grams to the pound). The average price at the retail level is $12 to $15 per gram, according to Livesay. The average wholesale price per gram is approximately $2. Outdoor production costs range from 25¢ to 50¢ per gram, but the harvest window allows only one harvest per year. On the indoor side, cost of production rises significantly, toward an average of $1.25 per gram, but allows for up to five harvests per year.

However, Foster is aiming for an eye-popping drop in the cost of indoor production: 45¢ per gram. Livesay says Foster’s grow site will require a workforce of 40, roughly a tenth of the manpower needed for comparable operations: “This will be at 60% less cost than other marijuana operations of approximate size.”

Livesay predicts federal legalization in 10 to 15 years, and says marijuana farming will go far beyond indoor grows and greenhouses: “Marijuana is going to be grown by farmers outdoors as a row crop. When you put American farmers in this space, marijuana production will go to a whole other level.”

“Marijuana is the next frontier of commercial agriculture,” Livesay adds. “People are starting to realize this is not the dire realm of reefer madness. This isn’t the devil’s lettuce.”

Matt Karnes is the founder of GreenWave Advisors, a company specializing in cannabis industry analysis, research reports and consultation. He believes every state will have a medical marijuana program within five years: “The pressure will ratchet up and the feds will have to respond to the will of the people. Marijuana likely will trade like any other commodity and someday the U.S. will be exporting cannabis to other countries.”

“We’re at the beginning of what we characterize as a ‘Marijuana market metamorphosis’ as states with both legalized medical and recreational use begin to evaluate the practicality of merged regulatory regimes,” Karnes adds.

In 2016, marijuana generated $7.6 billion in its second full year as an industry, but Easley says the true value is far greater: “We’re talking about $20 billion if you factor in ancillaries. However, factor in the U.S. illicit market, valued at $50 billion to $120 billion in the U.S., and it’s clear the numbers are exploding.”

Easley has been involved with the marijuana industry for 11 years, and despite the rate of growth quadrupling in 2017, he expects the current to get even faster in 2018. The exponential growth and phenomenal speed of the marijuana industry require the involvement of professional agriculture, according to Easley: “This is growing quicker than Silicon Valley. People that know agriculture can knock out some people presently in the marijuana business.”

Easley believes marijuana is four to 11 years away from becoming a standard U.S. crop. “It will happen,” he emphasizes. “It will be one of the highest value ag commodities in the U.S. Whether outdoors, greenhouse or indoors, all it takes is the right knowledge and expertise. If you can grow other crops properly, then you can grow marijuana.”

The future of marijuana demands professionalism and increased structure, Foster says. He advises interested growers to commit to proper research and examination: product, yields, state regulations and much more. “Factor in the x amount of dollars you’ll spend. Keep SG&A costs exactly where they need to be and work on them every day, just like you should with any other crop,” Foster notes. “Bar none, there are no better business people or hardworking people than farmers, but marijuana has to be treated with the right business model going in.”

“I farm because I love farming, but I’m a businessman too. Marijuana is going to be a standard agriculture crop and that is the financial reality. Take the price of half of half of half of what we’re getting today for marijuana: It’s still better than corn. I’ve done my research and I know what’s out there, especially on the medical side. Farmers better get dialed into marijuana.”