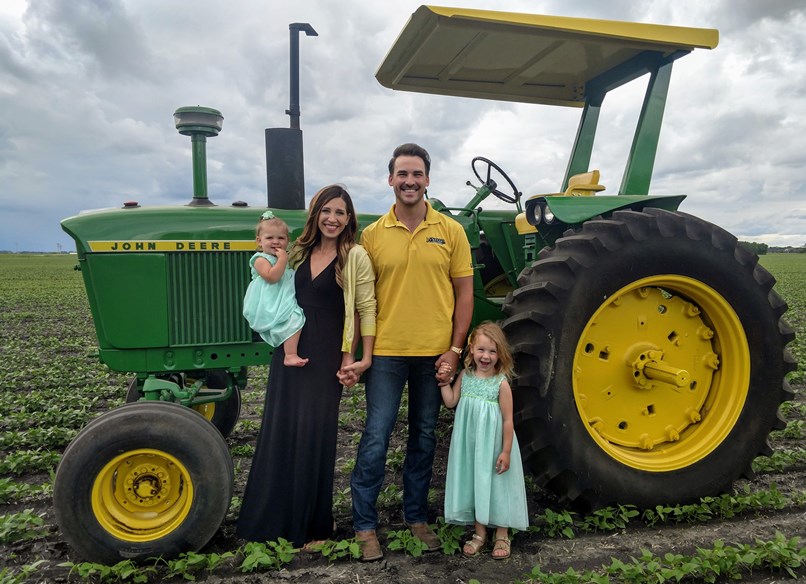 Hemp today, marijuana tomorrow, Chris Adams is not waiting for the farming rush. The 30-year-old maverick producer has picked the cannabis horse as a strong runner for agriculture and he’s hopping on right out of the gate.

Adams punched 300 acres of hemp ground in 2017 and hopes to start indoor production of marijuana in 2018. Along with sugar beets, hard red spring wheat, soybeans, six varieties of dry beans, bean processing and an export venture, Adams has grabbed the reins of a 9,000-acre farming legacy and is driving hard across the level land of the Red River Valley.

Sixty miles from the Canadian border, in Grand Forks, N.D., Adams farms a flat landscape of checkerboard ground, dotted with mile markers and clearly cut squares. “The topography is so flat; you can watch your dog run away forever,” Adams describes.

Two miles west of the Red River, Adams’ topsoil is a rock-free, Eden-quality mix of silty loams: Pick up a moist handful and the soil crumbles regardless of water content. Adams' 1’-deep topsoil is a generous host to multiple crops and in 2017, it held 10% of North Dakota’s total hemp acreage. Part of a state pilot program, Adams was one of 36 North Dakota hemp growers in 2017, and he was anxious to scratch ground with a brand new crop: “Hemp possibilities really pulled me in,” Adams says. “I don’t mind doing things different than everyone else.”

Only one processor in North Dakota is licensed to handle hemp seed. Adams drove to Healthy Oilseeds LLC in Carrington and picked up a supply of Canadian-imported seed from president and owner Roger Gussiaas. “Chris is intelligent, a driver and one of the best farmers around. There are few farmers that consider as many options as he does,” Gussiaas says.

Lindsey Warner, director of Marketing & Events for the North Dakota Trade Office (NDTO), has worked with Adams on crop export efforts, and describes him as a unique producer. “Chris is young, but he’s a true go-getter. He decides what he wants to do, takes the necessary steps and does it in quick fashion. It’s very impressive, particularly for his age.”

Prior to planting, Adams fertilized with 130 lb. per acre of nitrogen (a similar rate to his wheat production). On May 21, he used a John Deere air seeder to drop 25 lb. to 30 lb. of seed per acre on 7.5”-rows. “It’s a tiny seed and we treated it the same as grain, but just turned the blower way down and used lighter rollers,” he describes.

Bun in the oven, Adams shut the door. Essentially, he walked away with fertilization and planting complete. A 102-107 day maturity range pointed to the first days of September, and Adams wouldn’t touch the 300 acres of hemp again until harvest.

He typically fights herbicide-resistant kochia and ragweed, but was unsure about what level of weed pressure to expect in his hemp rows. However, the hemp jumped at a quick pace and the canopy was shuttered in three weeks, putting a chokehold on weed presence. Once the stand reached 18”-24”, Adam’s 100% dryland hemp began climbing a phenomenal 3” per day.

When September arrived, Adams rolled in at 14% moisture (dried in bins to 9% moisture) with a flex draper, treating the hemp like a wheat crop with one key difference: He kept the header almost as high as the mechanics allowed. “The only combine adjustment we made was to put in wide bar concaves. We also placed some rubber belting around the front drives and then on the sides where the steps are so nothing could get to the blowers,” he explains.

“By any standard, Chris’ hemp volume was very high. He’s always looking farther down the road for what may be coming next,” Gussiaas adds.

And the biomass left behind? The fiber and stalks can either be burned or baled. Adams baled the biomass and says he’ll leave the remainder in storage in hopes of market opportunity within two to three years. “My sources say it can be stored for seven to eight years and only lose a few inches off the end,” Adams notes. “The quality is high enough for animal bedding, paper, plastic, and hempcrete.”

Once taken off the field and dried in bins, the seed is loaded onto trailers bound for processing in Carrington. (Healthy Oilseeds LLC offers market contracts for Canadian buyers.) Currently, hemp marketing is restricted to a tight dance floor and few partners. Classified as a Schedule 1 drug, hemp remains highly regulated by the federal government. Domestically, there is essentially no market for hemp seed. Canadian companies buy U.S. hemp seed, turn it into oil, and send it back across the border for U.S. consumers.

What profit margins are possible? Adams paid roughly $50 per acre for seed, combined with a state hemp registration fee of 25$ per acre. Additionally, nitrogen costs were approximately $100 per acre. (Crop insurance wasn’t a factor; no availability for hemp.) Pared down, the bulk of expense was concentrated in fertilizer, seed and registration. Adams planted on ground he owned and dealt with no rent factors. Average land rent in the region is close to $200 per acre, according to Adams. Even if he’d planted on rented ground, his total hemp costs would have been about $400 per acre plus harvest expense.

“Going into the season hemp seed was at $1 per pound, but we didn’t have any contracts. It dropped during the season to 55 cents per pound. As things stand now, we’re looking at anywhere from $250-$350 per acre net. Nobody is going to complain about that,” Adams says.

For 2018, Adams projects similar regulatory conditions in North Dakota. He expects state officials may try to double production, but warns of oversupply pitfalls. “Opening the floodgates with limited processing would be a real problem. This crop is so good and I want it to succeed, but allowing too many acres too early will hurt hemp right from the start.”

North Dakota has given the nod to medical marijuana and Adams is keenly watching regulatory developments unfold. Initially, state officials will open a tiny market space: two growers and eight dispensaries. In July 2017, the North Dakota Department of Health requested letters of intent from interested growers and dispensaries: Adams and 96 other applicants turned in intent forms.

The next official step will be an application accompanied with a requisite, non-refundable $5,000 fee just to get a foot in the door. As always, Adams isn’t staring quietly at new opportunity: “We’re going for it. They’re using a point scale to make determinations and we know we’ve got as good a chance as anyone. This would be for indoor marijuana production at a secured spot on our farm. Each grower will be allowed to have 1,000 plants at one time.”

“I know not everyone is going to do it,” Adams adds, “but I don’t mind being at the forefront of something new.”