China remains very much on the minds of producers according to the latest Purdue/CME Group Ag Economy Barometer.

41% of those surveyed say they expect the trade dispute with China to be settled soon.  That number is about double what it was in July.

As far as the overall Ag Economy Barometer, the index dropped again this month to a reading of 121. 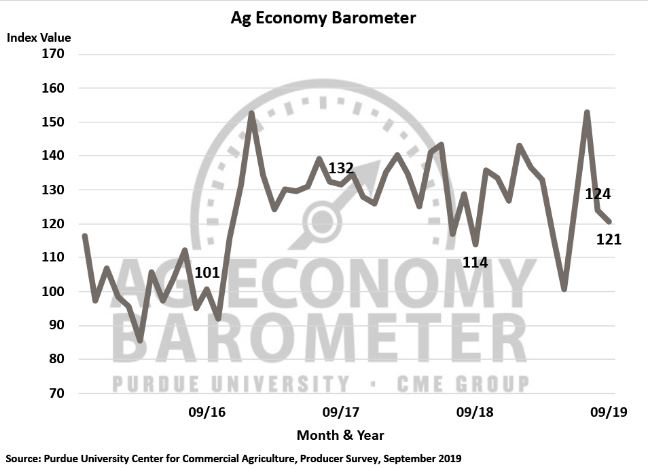 It's down three points from August and well off highs from earlier in the year.

Ag producers are also more pessimistic about current conditions for their farm and the ag economy, but felt better about future economic opportunties.  Much of that is driven by an expected eventual resolution to the trade dispute with China.

Purdue economist Jim Mintert said, "In recent months, there's an increasing percentage of farmers that say they expect to see the trade dispute with China resolved pretty quickly, which is somewhat interesting, and then secondly, as you look at it, pretty consistently, farmers have told us that they expect a positive outcome for U.S. agriculture to this trade dispute. Between 65% and around 71% of farmers in our survey, tell us consistently, that they think this will have a positive outcome for U.S. ag at the end of the day."

Until the dispute is resolved, concerns about current economic conditions led producers to be less inclined to think now is a good time to make large investments in their farming operations.  The Farm Capital Index fell to 47, which was 20 points lower than in July.

The Ag Economy Barometer is based upon results from a nationwide telephone survey of 400 U.S. crop and livestock producers.