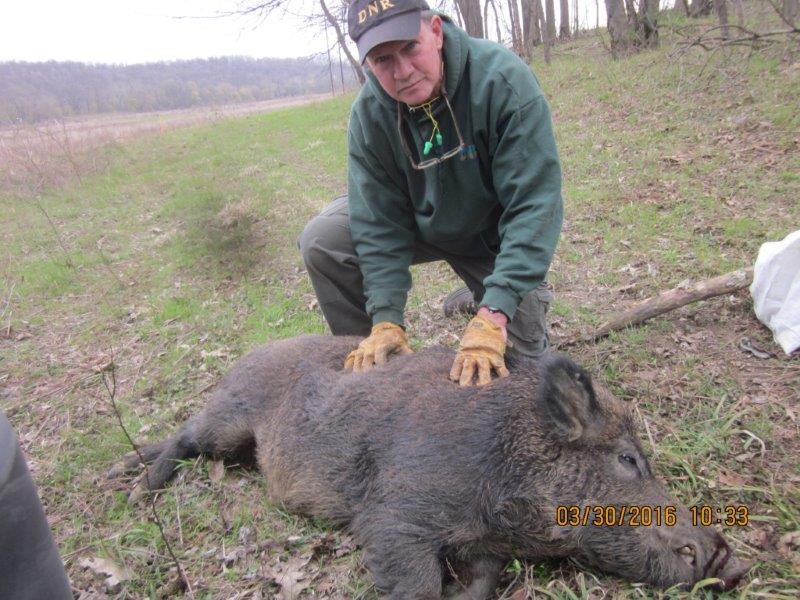 Hidden inside covered trailers or hauled in plain sight under the cover of darkness, wild pigs are on the move. Even trussed in car trunks, stuffed in dog boxes, stretched across back seats, or openly sold on Facebook, wild pigs often march to a man-made beat. Bottom line: The spread of 6.3 million wild pigs across the United States is assisted by rubber tires.

Illegal transport is a major cause of increased wild pig presence, an advance which contributes to an annual multi-billion dollar bill. Wild pigs cause up to $2.5 billion in damage to the U.S. economy each year and $1 billion of the total is exclusive to agriculture. Based on anecdotes and observation, wildlife personnel have long suspected illegal transport as a major catalyst of wild pig dispersal. Through advances in genetic technology, intuition is being confirmed with hard evidence: The most reproductively capable large animal in North America is hitching a human ride.

Wild pig expansion over the past 30 years has jumped from 19 states in 1985 to 39 states in 2016. Consistently on the cusp of a population explosion, sows typically deliver two litters in approximately 15 months. (However, sows are physiologically capable of producing two litters per year.) Females are able to reproduce as early as four months, fueling the multiplier effect.

Prolific breeding (combined with exceptional intelligence and phenomenal adaptability) requires the annual culling of 50 percent to 75 percent of a pig population to keep numbers in check, a control rate that’s often impossible to achieve. Jack Mayer, manager of the Environmental Sciences and Biotechnology Group at the Savannah River National Laboratory in Aiken, S.C., places the approximate U.S. wild pig population at 6.3 million, with an overall estimate ranging between 4.4 million to 11.3 million.

Wild pigs have a historical presence in the South, but consistently began popping up on Midwest wildlife radars in the early 1990s due to illegal transport. Steve Backs, a wildlife biologist with the Indiana Department of Natural Resources (IDNR), says the Midwest wild pig population is attributable to intentional sport releases and pen escapes.

Indiana’s current wild pig presence is limited to several counties, a population Backs attributes to a single probable source. According to Backs, in the mid-1990s, a resident of Louisiana used wild pigs as a cover to poach Indiana deer: “This guy would haul in wild hogs and release them. He’d hunt deer in the same location at night and when approached, he’d claim he was hunting hogs.”

“The rumor was he was killing Midwest deer and entering them in big buck contests in the South. We couldn’t catch him releasing the hogs, but we knew what was going on.”

Backs believes the suspect released over 60 wild pigs, a number easily capable of sparking a population explosion. “There were others doing the same thing and there was no coordinated effort, but the initial surge of hogs was likely due to his efforts,” Backs recalls.

Indiana authorities were eventually able to make a deer poaching-related arrest. “I knew who the SOB was for a decade. He was literally releasing hogs where I personally hunt. Circumstantial evidence shows he also was killing big deer and taking hogs into other Midwest states. There were Illinois counties with big deer that all of a sudden had wild hogs.”

Backs is chairman of the Feral Swine Committee for the Midwest Association of Fish and Wildlife Agencies (MAFWA), which includes representation from nine U.S. states and two Canadian provinces, and operates as an information exchange. In addition, Backs serves on the National Wild Pig Task Force, which is composed of representatives from state level organizations, universities and government agencies.

Backs describes wild pigs as “God’s perfect survival animals,” but says the hunting allure is ultimately a devil’s bargain. Wild pig presence translates to habitat loss for other animals, including deer: “We’re talking about cockroaches on hooves. We want to educate the public and remove the hunting incentive. When hogs show up, deer leave.”

Backs admits some Indiana landowners continue to foster wild pig populations for hunting purposes. Under Indiana livestock laws, a landowner is responsible for livestock damage to a neighbor’s crops, according to Backs. “It’s probably just a matter of time before an impacted farmer takes a neighbor, who continues to harbor wild pigs on their land, to court. If you want wild pigs on your property and don’t want to cooperate with removal, you may wind up before a judge in a civil suit.”

Hot on the trail of wild pig movement, Bronson Strickland is cooperating with scientists using genetic testing to prove that adjacent populations are often unrelated. Strickland, a wildlife biologist and wildlife management specialist with Mississippi State University Extension, says illegal releases occur under the radar, but technology is revealing the physical proof of unrelated sounders stretching from Florida to California.

Still in the rudimentary stages of testing, genetic technology is documenting the unnatural spread of pigs, according to Strickland: “We’re beginning to see concrete proof of what we’ve believed for a long time. Populations don’t just spring up overnight in Midwest states like Illinois or Ohio.”

Natural colonization of wild pigs is a slow spread that resembles rose petal layering as adjacent populations overlap. “Scientifically, when a group of pigs has unique genetics, it tells me they shouldn’t be in that location unless illegal transport is involved,” he says.

Who are the people physically trapping, transporting and releasing the pigs? Strickland points to a small group of outlaw hunters: “I’m not lumping anybody in because it’s a very small group engaging in illegal releases. These people want pigs in every county like we have deer in every county. It’s totally destructive.”

Yet, a few outlaws can ramp up an entire population of wild pigs. “They sneak pigs into a new area and those pigs quickly out-compete many of the native wildlife species we cherish,” he adds.

With no obvious signature, the outlaws typically move at night or use covered trailers. “Everyone should take this very seriously. If you see hogs on your property or trail camera, take action or risk an unmanageable situation. If you see anything suspicious regarding transport, call the Mississippi Department of Wildlife, Fisheries and Parks (MDWFP) so they can investigate,” Strickland advises.

On March 29, 2017, MDWFP agents raided a location in Walthall County related to wild pig activity. A ring of four individuals was trapping wild pigs in Louisiana, transporting them to a holding pen in Mississippi, and brazenly selling them on Facebook, according to Major Lane Ball, south region administrator at MDWFP. With online convenience, buyers made contact and arrived with trailers to illegally transport wild pigs beyond Walthall County. It was an unusual incident involving social media and illegal transport, but it offered a clear window into the pace and underground nature of wild pig dispersal. (There have been other significant wild pig transport arrests in Alabama, Kentucky and Tennessee.)

“We were able to stop these people, but we can’t tell how long they had been operating and how many other similar operations are out there,” Ball explains. “We aggressively pursuit illegal transport because these hogs are an unreal problem and there is no easy answer. Other than us, they have no predators and have free reign.”

Hog-dog hunting is tremendously popular in the South and fuels the illegal behavior of a tiny minority, Ball stresses: “The vast majority of hunters do it right and are great people. The simple fact is there are always some bad apples to spoil the whole bunch.”

Nationwide, more states are employing genetic profiles to monitor wild pig outbreaks. IDNR uses a genetic database to store wild pig DNA. As Backs and his team of wildlife specialists get farther down the wild pig removal trail, they’ll be able to detect whether new sounders originate in Indiana or out of state. In some cases, they may be able to trace new arrivals to a specific point of origin.

Again, 6.3 million wild pigs and possibly $2.5 billion in damage ($1 billion directly to agriculture) attest to the dire consequences of illegal wild pig transport. “Pigs don’t fly and we know how they’re getting here. We don’t have a hog hunting tradition yet and we don’t want one,” Backs adds. “Our Midwest pig problems are relatively small and we want to keep them that way.”