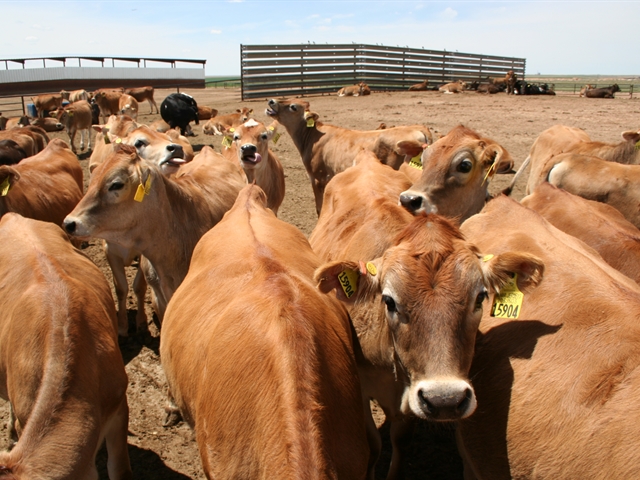 Milk prices that were at record-high levels in 2014 have abruptly plunged this winter, bringing new economic pressures on the region's dairy farmers.

Low milk prices could echo through the rest of the upstate economy, since dairy farming accounts for billions of dollars in economic activity across the state each year.

Despite the number of farms that have gone out of dairying in recent decades, New York is still the third most-productive dairy state — though is trails far behind California and Wisconsin. There are about 5,000 dairy farms in the state.

Sandra Prokop, whose family farm milks 375 cows in Middleburgh, Schoharie County, said the farm's monthly milk check revenue is down $40,000 since December, as prices have plunged. The farm has seven employees, and she estimates it contributes $2.5 million annually to the local economy.

The price is set by the federal government using complex formulas that weigh supply and demand.

The underlying facts behind the price decline include an oversupply of milk in the United States and the closing or shrinking of what were reliable export markets a year ago — forces far larger than the ballyhooed "yogurt boom" in upstate New York.

In addition to the international market changes, the record prices of last year prompted a lot of farmers to add more cows, and U.S. milk production rose 4 percent — while U.S. consumption of milk, cheese, yogurt and ice cream has remained more or less steady.

Both the highs and lows are part of a price cycle that runs roughly every three years, said Andrew Novakovic, a professor of agricultural economics at Cornell University and a part-time U.S. Department of Agriculture economist.

Novakovic said he expects milk prices to remain low for several more months, though it's hard to make predictions beyond summer.

The high prices last year, Novakovic said, made farms "amazingly profitable," because the price of corn, a primary cattle feed, was low. That should give farms a cushion for getting through the low price period, he said.

Willard Peck, a sixth-generation farmer in Northumberland, Saratoga County, said his Welcome Stock Farm plans to ride it out until prices rise again, and farmers have ridden out low prices before.

"You watch every penny and you don't make capital purchases," he said.

Farmers making fewer purchases will have an economic impact on their communities, Peck noted. "Farmers don't hang on to money. It passes into other hands. That's why agriculture is so important for upstate rural economies," he said.

New York Farm Bureau is arguing that the uncertainly of farm revenue, as shown by the low prices, is a reason why the New York state minimum wage shouldn't increase beyond the current $8.75, going to $9 in December. State law requires farms to pay the same minimum wage as other businesses.

"Farmers can't simply raise our prices because labor prices are going up. This is not a wise strategy to support agriculture or business in the state of New York," said Farm Bureau President Dean Norton, whose family has a dairy farm in western New York.

Tags:
$100 Ideas
They did not get mad, just even
John Phipps: Why Iron May be the Best Weed Fighting Tool Available
While $4 Corn May Be Unrealistic $3 Corn May Also Be Unlikely
Pro Farmer's First Thing Today: Wet Weather, Trade Talks and More
Kernel Rising: Cotton Could Soon Feed The World