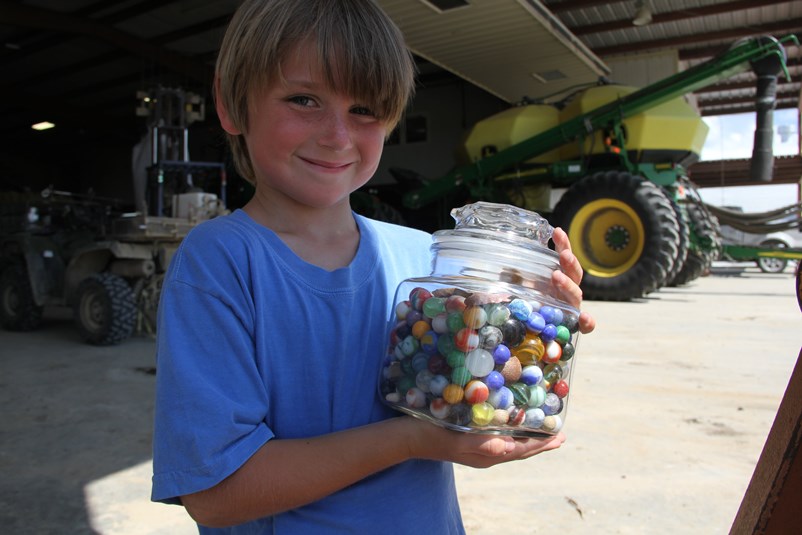 Childhood secrets are hiding in the dirt.

Months after crops are harvested and fields stripped to bare brown, the slanted rays of morning or evening sunlight fire large circular patterns of crushed glass spread across farmland. Glitter sprinkled over soil, the shining glass graveyards at field edges are the stubborn remains of sharecropper and tenant farmer sites once dotting even the most remote Southern farmland. The shotgun houses and clapboard shacks are gone, but a child’s toy waits patiently, lingering in the rows. Time, tillage, and rainfall reveal the sharecropper’s last testament: forgotten clusters of magnificent clay, agate and glass marbles.

On a clear day in early May, Bernie Wright is walking rows, eyes down and head moving gently back and forth. A single inch of rain has parked Wright’s cotton planters, but it hasn’t kept him out of the fields.

There’s something special about the marbles in these fields and I love finding them," he says. "They meant a lot to somebody long ago and maybe that’s why I enjoy looking."

Wright, 57, is searching at mid-day and doesn’t need sun on the horizon to fire glass and serve as a site map, because he already knows where the old homes stood. Most of the tenant houses were torn down in the 1960s and Wright, farm manager at Longino Planting Co., in Jonestown, Miss., remembers the locations from childhood.

Before the advent of heavy machinery capable of servicing thousands of acres, the flat vista of Mississippi Delta farmland was heavily pocked with houses lining turn rows and county roads. The tenant system required on-site workers and the accompanying logistics translated to a range of housing layouts, from an isolated handful of dwellings on a back road to scores of homes concentrated around a commissary and schoolhouse. Necessity dictated tenants live and work at the same location.

“People have forgotten how many houses used to cover farm ground,” Wright says. “Sharecroppers had to live on their parcel of land.”

The old house sites are a slurry of glass shards, stoneware chips, bricks, buttons, coal, mangled cutlery, cork-top bottlenecks, and much more – the detritus of a farming day long since passed. Yet, in stark contrast to the other crushed remains, time has been kind to the marble spheres. Small enough to evade tillage tools, tough enough to withstand compaction, and colorful enough to draw the human eye, marbles have endured the age of mechanization.

When a marble rests just below the soil line, rain and wind start an umbrella action, and the smooth spherical marble surface sheds dirt particles, leaving the rounded top naked to a searching gaze. With a bit of luck and time, a marble exposed in a raised bed and cleaned of debris may follow the grade and roll down into a furrow, as if just dropped from a child’s hand into a row. More often, only a sliver of body shows in the dirt and offers one chance to claim a marble before weather, crops or machinery cover it again.

After church on a spring Sunday, Chris Kale eases along a turn row with wife, Cindy, and a truckload of grandkids, looking for house sites. A 2” rain fell four days prior and Kale knows the ground is ripe for marble hunting. He spots a slightly raised hump just off the turn row and sees glass scattered across soil a shade darker than the surrounding field. In seconds, the family spills out of the truck and the hunt is on.

The Kales spread out 3’ to 4’ apart and methodically canvass a roughly 100’-by-100’ section to compensate for tillage spread of houses that were often originally 40’-by-40’. Equipment and land leveling push marbles across all points in a given field, but the vast majority remain in proximity to home sites.

“It’s all about family, the hunt and history,” Kale says.

“There’s history laying at your feet and all you have to do is pick it up,” Cindy echoes. “Chris can’t drive by a field without looking for shining glass. If he sees something, he’ll either go look or get the grandkids and go back later.”

Kale, co-owner of Farmers Supply in Marvell, Ark., hunted arrowheads as a boy and began taking his own children on marble searches in the late 1980s. The weekly treasure hunts turned into a family constitutional, and at 58, Kale isn’t slowing down. Simply, he is a marble whisperer and has honed his skills with a focus on location, timing, possibility, quality, quantity and blind luck.

“I’ll pick up a marble that might be untouched by human hands for 100 years,” he says. “What child lost it? What was the child’s name? It was part of someone’s life and I respect that.”

Most sites around Marvell date from the late 1800s to the 1960s, Kale estimates. Families typically had four to eight kids, and despite poverty, marbles were the sole luxury afforded to children. A subsistence sharecropper, unable to buy any other toy for his kids, could still afford to purchase marbles. Even today, find a beautiful agate with a distinct pattern, and chances are the same house site is hiding many more similar specimens – direct evidence of a quantity bag or box purchase at a general store or commissary.

Marbles were part and parcel of youth, the single most ubiquitous item of childhood. Poor or poorer, marbles were the great equalizer. The treble of affordability, quantity and durability explains the overwhelming numbers of marbles found today on farmland. Kale estimates a sharecropper child might have owned 20 marbles at a given time. However, when a single house site spits up 75 or even 100 marbles, questions mount as to why and how.

“I can’t believe kids lost as many as we’ve found on some sites. In fact, I think these marbles were sacred in a way to children,” Kale says. “There was more going on than kids losing marbles. Lost during play, thrown away by momma, or left behind when a family moved, all of these are parts of the puzzle."

The evidence in the ground doesn’t necessarily match conventional logic at some house sites, especially those which don’t produce marbles. Kale cites a tenant house he remembers from childhood, a home to multiple children and a particular hub of activity. He’s scoured the knoll for years and found coins, buttons, and porcelain, but not a single marble.

“That house had dozens of children spread across several generations and hasn’t yielded even one marble,” Kale says. “It’s frustrating, but I guess some questions stay buried.”

Beyond the telltale glass scattered across home sites, Kale paints a rough mental picture of typical marble locations. Concentrations correspond with play zones, the actual spots where kids gathered, drew circles in the dirt, and shot for keeps. The zones share one overriding trait: shade from the Delta sun. Either under a porch, against the north or east side of a house, or beneath a tree, a game of marbles was shot in the shade. Find a play zone and it’s likely to be a marble honey hole.

“It’s telltale when I find 10 marbles in a single tight spot,” Kale says. “That’s a location where kids were playing and marbles surface there year after year.”

To the uninitiated, Curtis Storey, 57, is walking across his east Arkansas ground, checking a polypipe irrigation line, but in reality, he’s also hunting marbles.

“I love finding marbles on my land; absolutely love it," he says. "There’s history in a marble and you can feel it.”

“My family has worked this land for years, and yet these marbles pop out of my fields in amazing shape,” he says. “Pieces of glass light up on the ground, especially in the morning or evening, and draw you in to look. It never gets old, even when I find just one little marble.”

As a young boy, Storey rode atop a metal seat on the back of a four-row planter while his father, Ronald, cultivated cotton. When Storey saw a gleam in the dirt, he would whistle for Ronald to stop, and then jump down to collect the marble. If the engine noise was too loud for whistling, Storey tossed a dirt clod at Ronald to halt the machinery.

“I’d see color shining and be gone to get that marble," he says. "My daddy would start hollering, ‘We’ve got cotton to plant, son. You’re stopping me for marbles again?’”

Storey’s catbird perch was as dangerous as it was fruitful. On a windy, dusty day in 1964, five-year-old Storey and Ronald were planting soybeans on a John Deere 3010 with a single front tire. No cab, no fenders. An old, non-hydraulic marker swung around the front of the tractor as Storey stood on the left side of the back axle to avoid the dirt and held tight to the seat.

Rut or lurch, Storey was thrown off the axle while the tractor rumbled along in fifth gear, falling forward into the dirt. The tire rose above Storey, a cleat striking him in the head and pushing his face deep into the ground, packing the inside of his eyelids and nostrils with soil. With a fraction of a second to spare, Ronald smashed the clutch and backed up before Storey was crushed. Cradled in Ronald’s arms, Storey was sure he’d died: “I asked my daddy if I was dead. Five year olds don’t think about death, but it was all black from the dirt under my eyelids and I couldn’t see. Anyhow, I should have been dead.”

Racing across the field, Ronald placed Storey in his truck cab, scalded road for the doctor’s office, and slung four buckets of soybeans across the highway. After a lengthy cleaning, a bald spot where the hair peeled up his forehead, a concussion, and a lick of salve, Storey survived by a matter of millimeters.

“The Lord decided it wasn’t my time,” he says. “To this day, I don’t look at old metal planter seats without thinking about my daddy, that accident and marbles. They all tie together. Someone else’s marbles represent farm memories of my own childhood.”

Kale has never counted his farm marbles, but he keeps the collection in a variety of candy jars as proof of his prowess. Thousands of marbles of all sizes, colors and patterns fill the jars, separated by an occasional arrowhead, button or porcelain doll part. His massive marble trove is all the more remarkable considering it was built one specimen at a time: spot, kneel, and pry the past from the ground.

He can’t fully explain the primal pull that perpetually draws him into the fields to find another marble.

“Farmland is kind of like a museum and it’s even more enjoyable with age due to my family,” Kale says. “Every single find is exciting because it carries a physical connection to a different time, place and people.”

Come spring, Kale will hit the rows again with his family, searching for one more marble hidden in the dirt. Change is the great constant in farming, yet although the sharecroppers are gone and the houses torn down, the marbles remain, waiting patiently to tell a buried tale.

“Find a marble that hasn’t seen daylight in 75 years, pick it up and rub the grit off,” Kale adds. “You’ll almost hear it speak.”