“There is a way—and it is incredibly simple—to unplug the auger and keep people out of the bin at the same time,” says Nebraska producer Guy Mills.
( Photo courtesy of Guy Mills )

Guy Mills flips a switch and watches three-plus bushels of yellow corn explode out of his bin, arc across a blue sky, and crash 50’ away into brown dirt. “There’s no doubt, no doubt,” he exclaims. “This is going to save lives. The days of going inside a bin to break up corn should be over.”

As grain bin deaths continue to haunt agriculture, could an air compressor, along with a tiny bit of DIY tinkering, be a solution? Mills is convinced of the affirmative, and says a 250 cfm air compressor is the answer hiding in plain sight. No patents, no intellectual property, and no legal hurdles—the farm shop solution is available to all and Mills is eager for U.S. agriculture to hear about an entrapment remedy he describes as “light years ahead of anything out there.”

In the bull’s-eye of Nebraska, on Custer County ground, Mills, 59, grows alfalfa, corn and soybeans. A board member of the Nebraska Corn Growers Association and fifth-generation farmer, he knows the perennial peril associated with grain bins as well as anyone. Entrapments from past years are stamped in his memory, and significantly, on the cusp of 2019 fall harvest, Mills points to two Nebraska bin deaths—both roughly a month prior to the roll of combines.

“We all know there are more bins being built and we all know the danger is there. But the deaths don’t have to continue. There is a way—and it is incredibly simple—to unplug the auger and keep people out of the bin at the same time.”

Mills’ solution? During a spring blizzard of 2019, snow blew into one his bins of stored corn, and despite removing several  loads, he still faced inevitable clumping. “I ran into an employee working for Trotter Fertilizer Incorporated of Arcadia Nebraska.  He was using a commercial air compressor to remove a plug. I was in shock and wondered why I’d never heard of this. I made my own version and it worked great, and now I want everyone to know about this.” 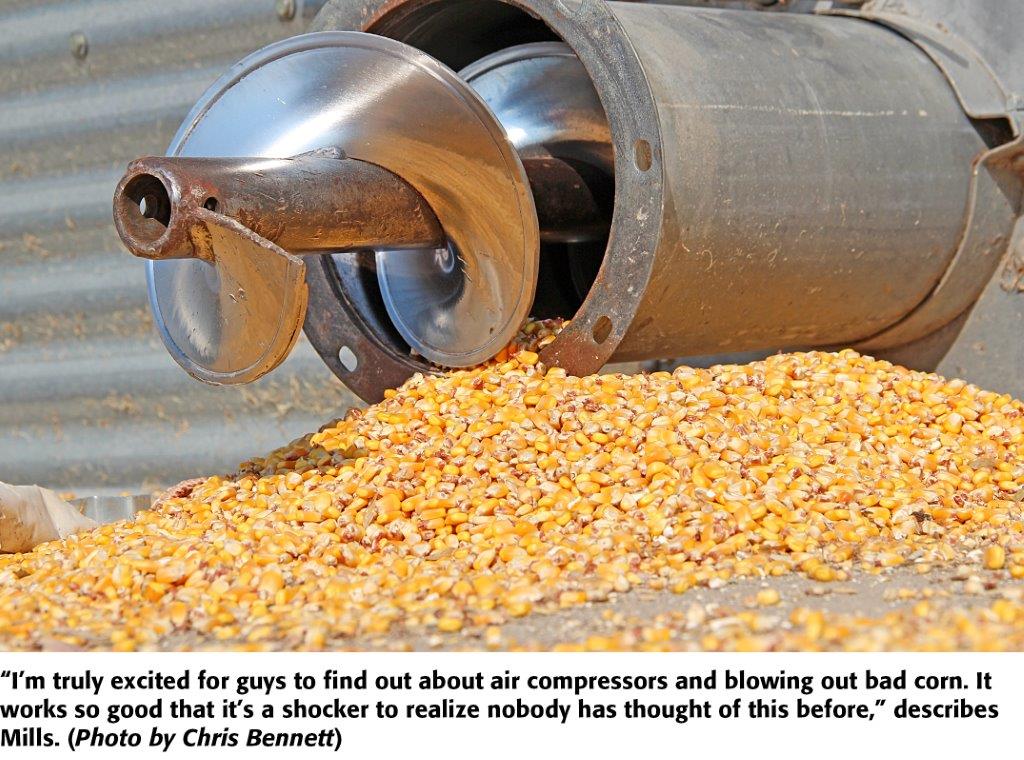 Essentially, Mills’ eureka moment centers on the use of a commercial air compressor to blow out plugs as a preventive measure related to the dangers of bin entry and grain collapse. Mills contends the shop-solution technology only takes a few minutes to build, is extremely low-cost, and removes clogs in just a few minutes.

Typical air compressors on a farm often run at roughly 50 cfm, but plug removal requires a machine to produce an incredible amount of air—250 cfm. “A commercial air compressor is way too much for most farmers at around $25,000, but that’s not what I’m talking about,” Mills says. “You can rent one for $50 per day. Then you can get your bin auger unplugged in three or four minutes.”

“Remove your auger and insert the ¾” pipe with one elbow and stem, and blow out the plug by rotating back and forth in the sump. Use vise grips to mark the stem position. The corn is gonna fill the sump,” Mills explains.

“Then take out the ¾” inch pipe and replace the stem with the second elbow. Close the trap and insert the ¾” pipe with both elbows in the tube. Blow the crop out of the tube and be careful because the force is unreal and corn will shoot 50’ away. Then open the trap and if the corn falls into the sump, the process is complete.”

What if the sump plugs again? “Repeat the process. In extreme cases where crop pillars are present, you can drill a 1” hole into the side of the bin, and use a shorter pipe to reach the intermediate well. In this case, take a ¾” pipe and flatten one end and drill a 3/8” hole in the pipe’s side. Work this short pipe back and forth over the intermediate well and the crop will flow." 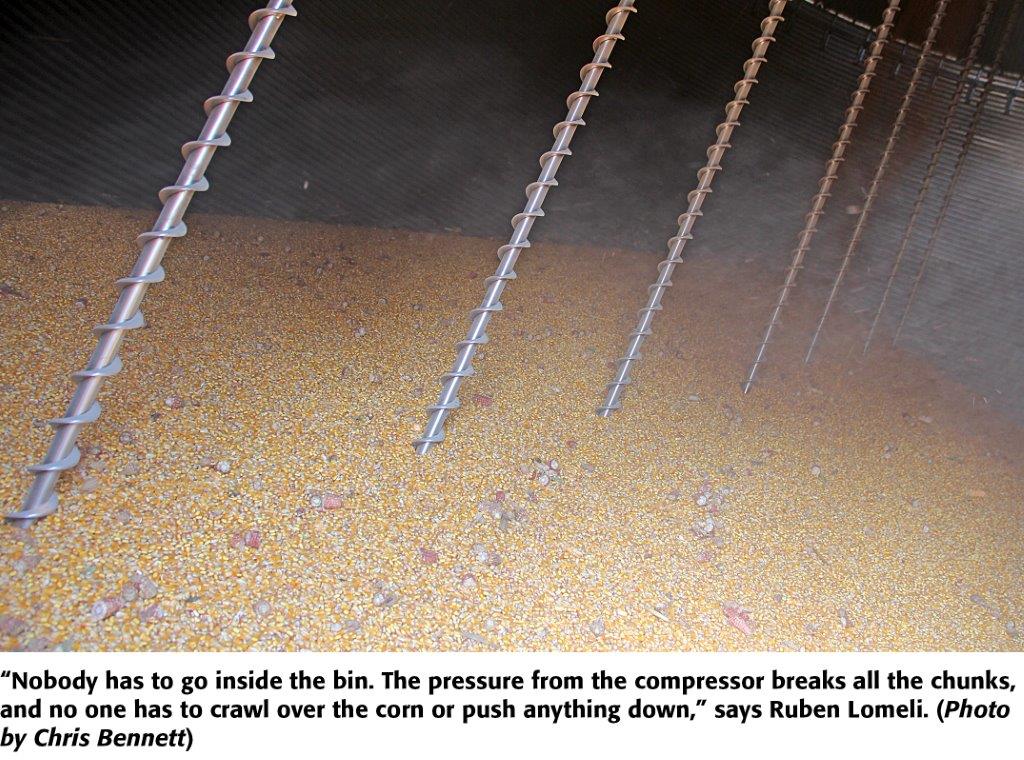 Mills also recommends checking bin manufacturer specifications: “Some bins will tolerate unloading using an intermediate well, while other bins could be damaged. I’ve contacted some bin manufacturers and asked them to evaluate this process and consider placing a permeant airline in new bin construction.”

Ruben Lomeli works alongside Mills, and was initially skeptical of the compressor method, but after firsthand witness, Lomeli is a true believer. “We rigged it up and I wasn’t expecting very much because I wasn’t sure it was going to work, but it did work really, really good,” he says.

The compressor doesn’t require bin entry, Lomeli emphasizes: “Nobody has to go inside the bin. The pressure from the compressor breaks all the chunks, and no one has to crawl over the corn or push anything down.”

Considering the extensive late planting issues experienced by growers across a significant portion of the Midwest in 2019, Mills expects heightened storage quality issues by spring 2020. “I think there’s going to be a lot of bin trouble with poor quality corn by March when temperatures start to rise. This means farmers will be going into their bins to deal with spoiled corn.”

Mills advocates a systems approach to bin safety, starting prior to planting. “Keeping somebody safe starts with hybrid choice, planting date and fertility, even though sometimes a guy has few choices. I’m talking about sulfur, phosphorus and nitrogen considerations that give you a harder starch. Also, we use two fungicides to ensure a harder kernel. A lot of it goes back to fungicides. A green plant with a white ear will reach physiological maturity. Sure, it’s just one factor of many, but everything counts.” 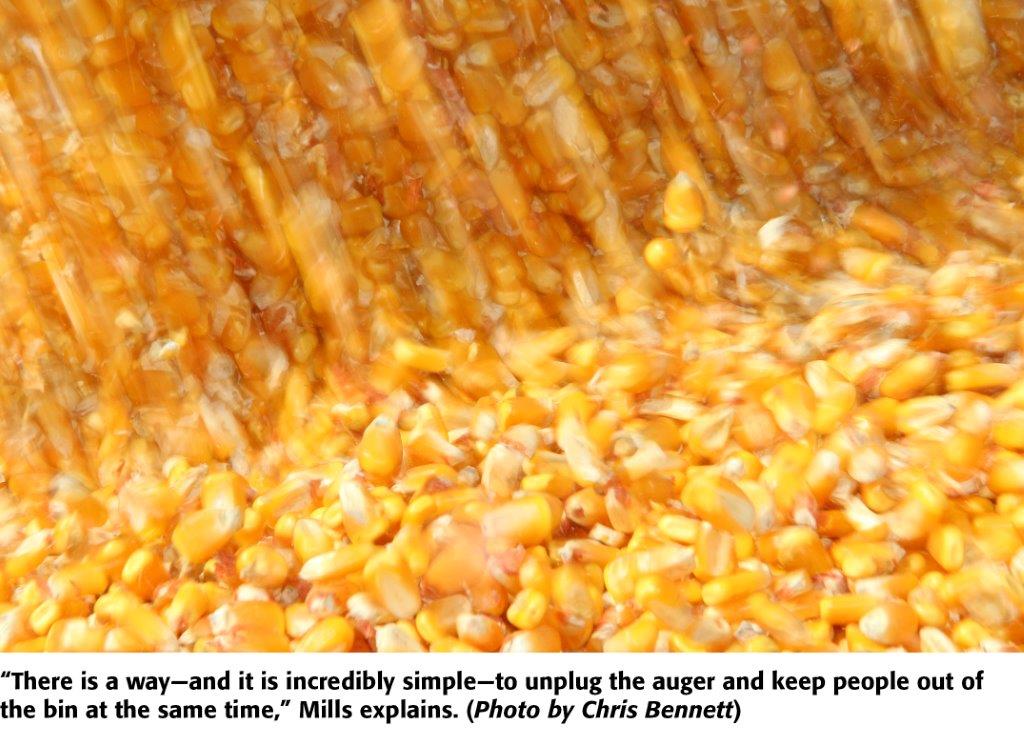 “Also, think about combine adjustments,” Mills continues. “One main mistake is a loose clean grain elevator chain. A kernel between the sprocket and chain gets cracked, and then enters the bin and is susceptible to spoilage. There’s a lot going on before corn reaches the bin.”

Further, Mills uses a seed cleaner on corn after drying, and uses the fines as cattle feed. He also has replaced axial fans with oversized centrifugal fans for a higher volume of air. Every Tuesday, he makes a clockwork effort to physically check his stored crop. “We’re old fashioned, but we pay careful attention to corn quality and watch our bins really close. Do I smell anything? Do I feel heat? Is it wet to the touch? Is there a crust? How deep do I sink in when walking across the corn? This inspection is still performed even though moisture and temperature cables are installed in the larger 110,000-bushel bins. It takes discipline, but that’s where the profit is in being able to capture appreciated basis and carry in the market by storing corn.”

Convinced that commercial air compressors are a bottom-line solution for breaking up grain, Mills says they can also keep OSHA regulations at bay. “This can keep people from getting killed and it can keep OSHA off our farms.”

“I’m truly excited for guys to find out about air compressors and blowing out bad corn. It works so good that it’s a shocker to realize nobody has thought of this before.”

“Such a simple process; a couple hundred dollars at most; three or four minutes to complete; works for any crop; and nobody inside the bin,” Mills concludes. “I have no doubt this is going to lives on the farm.”

Rat Hunting with the Dogs of War, Farming's Greatest Show on Legs