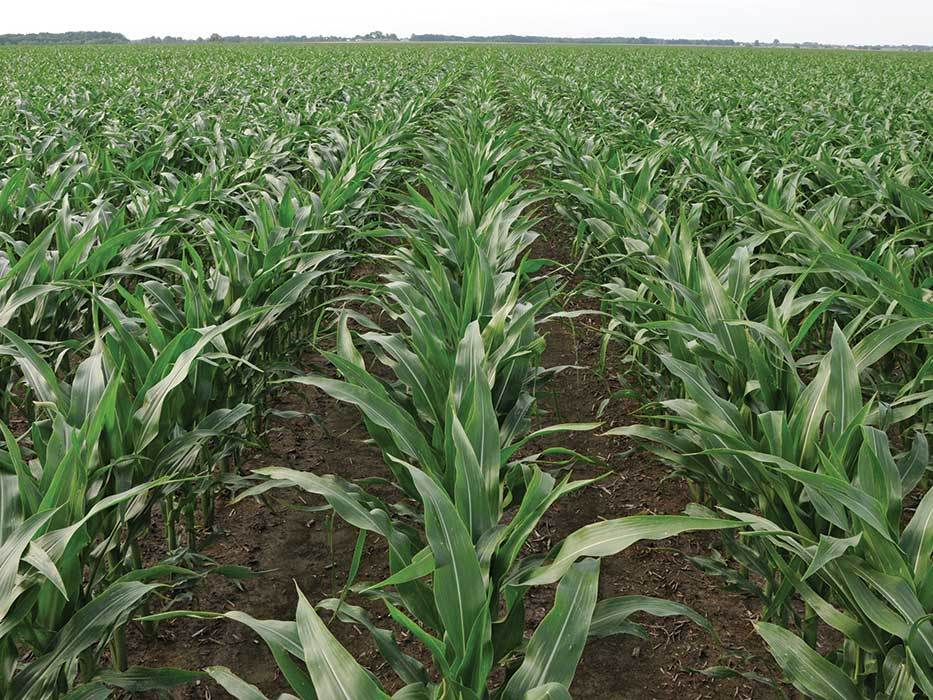 It’s likely not the first nutrient you think about, but boron is critical to many plant functions

When a nutrient registers a mere 0.5 ppm to 2.0 ppm on most soil tests, farmers might not give it much notice. But plants do because power-punching boron helps make possible a laundry list of critical functions, says Farm Journal Field Agronomist Ken Ferrie. For example, boron:

Boron deficiencies show up differently in corn and soybeans. In corn, because boron does not move inside the plant, you’ll find deficiency symptoms in the youngest leaves.

“Look for white spots scattered between veins, eventually forming strips,” Ferrie says. “Because boron is involved in cell division, you might see shortened internodes (a stacked appearance). With a severe deficiency, the whorl might not unfurl—a symptom that mimics damage caused by some herbicides.

“Because boron is involved in pollination, deficient plants might have barren ears or even blank stalks,” Ferrie continues. “The trademark symptom of boron deficiency is banana-shaped ears in which the kernels abort off one side. Banana ears also are a symptom of drought—not surprising because a shortage of boron causes plants to do a poor job of managing water.”

In soybeans, look for shortened, swelled internodes, similar to deficiency symptoms in corn. “On deficient plants, leaves will be thicker than normal and their color will be darker than normal,” Ferrie explains. “With severe boron deficiency, soybean leaves will be cupped or curled downward. This is similar to damage from growth-regulator herbicides, but herbicides usually cause leaves to cup upward, not downward.

“Other symptoms include chlorosis between leaf veins and, eventually, crinkling of leaves, looking almost like the leaf was burned. Boron deficiency reduces the ability of soybeans to successfully flower,” he adds.

Plant species vary in their response to boron. “With micronutrients, plants are broken down into high, low or medium response groups,” Ferrie says. “With boron, alfalfa is highly responsive, clover is medium responsive and soybeans are low responsive. So, while maintaining adequate soil levels is important in a corn/soybean rotation, it is even more important if you grow alfalfa.”

On plant tissue tests, the sufficiency range for boron is lower for grass crops than for legumes:

Within each crop type (grasses and legumes), there are differences among hybrids or varieties in how well they respond to boron. “Because the optimum range is so small, overapplication can cause boron toxicity,” Ferrie says. “If you ever find yourself in that situation, choose hybrids that take up less boron.”

Not all the boron in soil is available to plants. “In the soil, some boron can be in the mineral form, which might be adsorbed to soil particles—clays and iron and aluminum oxides,” Ferrie says. “Boron adsorbed to clay particles can be released, depending on pH and microbial activity. Some boron is tied up in organic matter and microbes.

“If you look at the total boron from all sources, you could see values between 10 ppm and 100 ppm,” Ferrie continues. “But only the boron in the soil solution is available to plants; so that is the reading to look at on a soil test. You want it to be in the 0.5 ppm to 2.0 ppm range.”

Most scientists believe boron in the soil solution flows into plant roots with water in a process called mass flow. “That’s passive uptake, as opposed to metabolic uptake in which plants exert energy to draw in a nutrient,” Ferrie notes.

In this regard, boron is different from nutrients such as phosphorus, which are taken up metabolically. “The transpiration rate exerts more influence on boron uptake than on phosphorus uptake,” Ferrie says. “Because of a different uptake process, you can have low phosphorus levels in the soil but high levels in the plant tissue because the plant goes out and grabs it. But with boron, the amount stored in the soil solution always correlates to the amount stored in the plant.”

As water is transpired from plants into the atmosphere, more water from the soil enters the roots, carrying
boron along with it. “So on days with low humidity and high air temperature, more boron enters the plants,” Ferrie says. “The transpiration rate also is influenced by soil temperature, soil type, moisture and the fertility balance of other nutrients.

“Because boron uptake from the soil solution is affected by the plants’ transpiration rate, it can change from day to day, or even hour to hour,” Ferrie continues. “A soil test by itself is not the best indicator of boron sufficiency, although it can help tell whether soil levels are at the high or low end.”

Various factors can affect the amount of boron that will be available to your crop. “The biggest factor is soil pH,” Ferrie says. “High pH reduces the availability of boron; low pH makes boron more available.”

Leaching can further deplete the boron supply in coarse soils and in higher-rainfall or irrigated areas. “Boric acid is subject to leaching because it carries a neutral electrical charge, and it does not attach to soil particles,” Ferrie explains.

Dry conditions might decrease boron availability because the nutrient depends on water to carry it into the plant roots.

Nutrient balance can also be an issue. “Excessive levels of potassium and calcium can reduce boron uptake,” Ferrie says. “Because they are cations—ions carrying a positive charge—they can tie up the boron ions. Corn stressed by nitrogen deficiency, compaction or root problems often shows boron deficiency symptoms as well.”

At the opposite end of the spectrum, too much boron can be toxic to plants. “Toxicity symptoms appear on the older parts of leaves,” Ferrie says. “The leaf, margin and tips get chlorosis, followed by browning of the leaf tips as the tissue ‘burns off.’ When that happens, the outer edge of the leaf looks burned, somewhat similar to potassium deficiency symptoms. Because of the variation in crop response, boron levels that are toxic to one crop will not be toxic to another. For example, small grains might be affected but not sugar beets or alfalfa.”

In the next installment of Nutrient Navigator, we’ll tell you how to provide enough of this vital nutrient to keep plants happy, but never so much as to be toxic.

Learn and Profit from Nutrient Navigator

The Nutrient Navigator series focuses on efficient, environmentally sound management of nutrients. The goal is to provide practical knowledge that helps drive yields and profits higher.