The Role of Manganese 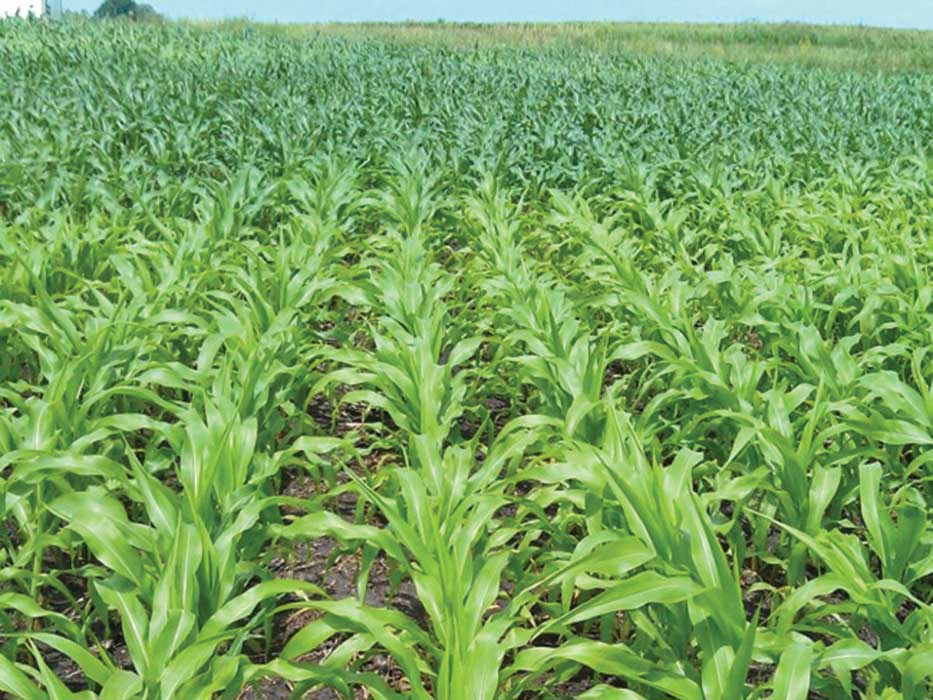 Although there are differences, manganese deficiency symptoms can be confused with those of zinc deficiency and the early stages of iron deficiency. Confirm visual symptoms with plant tissue testing.
( Crop-Tech Consulting )

From photosynthesis to building carbohydrates, manganese packs a punch

Like other micronutrients we’ve discussed, manganese is a mighty mite. It requires only 10 ppm to 25 ppm
in the soil, but it packs a punch.

In this installment of Nutrient Navigator, we’ll explain why manganese is important and how to spot problems. In the next installment, we’ll tell you how to avoid or correct them.

Manganese exerts its impact because of its role in the vital photosynthetic process, which converts sunlight into plant energy, Ferrie explains. “It affects chloroplast formation in leaves, which impacts chlorophyll production. It also plays a role in building carbohydrates and metabolizing nitrogen, especially in corn. It also serves as a trigger that causes certain enzymes to perform their roles in the plant.”

Plants vary in their response to manganese, Ferrie continues. Soybeans, oats and wheat are highly responsive; corn falls into the medium range.

“Monitor these crops more closely than less-responsive crops,” Ferrie says. “If you’re going to apply manganese fertilizer to just one crop, it should be soybeans. But if you see manganese deficiency in corn, pay attention because the following soybean crop will show the effect more aggressively.”

Since the nutrient affects chlorophyll production, deficiencies reveal themselves with unnatural leaf color. “Younger leaves will exhibit chlorosis, so they will be kind of olive green, instead of bright green, in color,” Ferrie says. “When you inspect closely, you will discover chlorosis between the veins, while the veins themselves remain unnaturally dark.

“In corn, the lighter stripes will run the full length of the leaf,” Ferrie continues. “They can be mistaken for zinc deficiency, magnesium deficiency and the early stages of iron deficiency. But zinc striping shows up only on the lower half of the leaf, while magnesium striping occurs only on the older leaves. With iron deficiency, the veins become even more pronounced, darker in color, than with manganese deficiency, resulting in greater contrast between the interveinal area and the vein.

Manganese toxicity, the opposite of deficiency because it results from excessive manganese, is characterized by darkening of veins and some chlorosis on the older leaves of plants. In corn, dead tissue develops between the leaf veins. In soybeans, leaves crinkle and cup downward.

Most of the manganese used by plants comes from the soil solution (water and nutrients held in pore spaces between soil particles). Manganese is mineralized from unavailable forms and released into the soil solution by microbial activity. Remember the healthier your soil, the more microbes there are and the more nutrients are available to plants.

Manganese in the soil solution reaches plant roots by processes called mass flow and diffusion. In mass flow, nutrients are carried in water as it moves from the soil through the plants and, ultimately, out of the leaves and into the atmosphere through the process called transpiration. In diffusion, nutrients move from an area of higher concentration to one of lower concentration.

The process—from the unavailable form to the available form and into your plant—can be called the manganese cycle, Ferrie says. If the cycle gets thrown out of whack, plants become deficient in manganese or suffer from manganese toxicity.

With experience, you’ll learn how to identify deficiencies and where to expect them, Ferrie says. As with all fertility issues, soil testing is one of your primary tools.

“But when soil testing for manganese, there are challenges,” Ferrie says. “For one, the availability of manganese is affected by soil pH and organic matter content. The manganese level that is considered adequate at a water pH reading of 6.2 in one soil will be considered deficient at a water pH of 7.2 in another soil. So, test your soil based on established management zones.

“A soil test provides a starting point by telling you whether the soil manganese level is high, medium or low,” Ferrie says. “But because the amount of fixation varies based on soil texture and pH, I’ve seen instances where a farmer doubled the amount of manganese in his soil without increasing uptake by plants. I recommend combining soil testing with knowledge of where to expect deficiencies, field scouting and tissue testing.”

Anticipate pH issues where soil pH is too high or too low; in muck soils; in sandy, leachable soils; in poorly drained soils; and in any soil during a drought. “At a water pH reading above 6.5, manganese becomes tied up and unavailable to plants,” Ferrie explains. “Below a water pH of 5.0, excessive amounts of manganese become available, and you may encounter toxicity problems.”

On muck soils, inorganic manganese (the form that can be used by plants) becomes tied up by organic material and unavailable to plants. “A muck soil with a water pH reading above 6.5 is facing a double whammy,” Ferrie says. “Availability of manganese is almost guaranteed to be poor.”

In sandy soils with poor waterholding capacity, manganese is leached away. “But a lack of moisture can cause problems in any soil,” Ferrie says. “If even a heavy soil runs out of water, mass flow will be reduced and less manganese will enter the plant.”

Also look for manganese toxicity, Ferrie says. In waterlogged conditions, manganese oxide, which is unavailable to plants, undergoes a chemical reduction and enters the soil solution.

“When you notice visual symptoms, follow up with tissue analysis to confirm the deficiency,” he adds. “After a few years of scouting, you’ll know where to expect problems every year and where to expect them occasionally because of cold weather, wet soils or severe drought.”

Keep a close eye on soybeans, oats and wheat, which are highly responsive to manganese. Corn is less responsive. If you’re going to apply manganese fertilizer to just one crop, it should be soybeans.

Where to Expect Manganese Problems