The Secrets of Sulfur 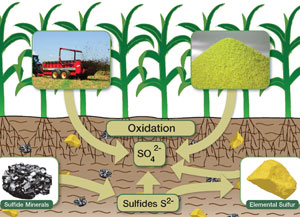 Here’s how to manage a crucial, but often overlooked, building block of high corn yield

Nitrogen is the foundation of high corn yields. But the nitrogen you apply might be wasted if your soil lacks sulfur, a critical micronutrient that helps plants metabolize nitrogen.

"Sulfur deficiencies are becoming more common," reports Farm Journal Field Agronomist Ken Ferrie. "It used to be one element we seldom had to worry about. But, during the past 40 years, things have changed, and we now are removing more sulfur than we put into the soil."

Acid rain, containing sulfur emitted by industry, used to be farmers’ main source of sulfur—and it was free. But the Clean Air Act of 1972 has drastically reduced the amount of acid rain falling on fields.

Sulfur is required to transfer sunlight energy into plant growth. It is a big factor in the production of chlorophyll, which is why sulfur-deficient plants turn yellow.

"Most importantly, sulfur is required to metabolize nitrogen. If a tissue test shows plants are low in sulfur, they also will be low in nitrogen. In other words, the absence of sulfur can create a nitrogen deficiency in the plant—you can apply 300 lb. of nitrogen to a field, but, without sulfur, the plants won’t be able to use it," Ferrie says.

Deficiency symptoms. Severe sulfur deficiency stunts plants and delays maturity. Besides retarded growth, the most obvious symptom reflects reduced photosynthetic activity: The younger leaves, at the top of the plant, will have a light green or yellow stripe.

"Because sulfur is not mobile in the plant, it can’t be moved upward from the bottom to correct the deficiency," Ferrie says. "So the symptoms show up in the new growth rather than at the bottom of the plant, as they do with nitrogen deficiency."

Sulfur in the soil. In the soil, sulfur exists as mineral sulfates (such as calcium sulfate, magnesium sulfate and potassium sulfate), as sulfide gas and as elemental sulfur.

"All these forms must be oxidized, or ‘mineralized,’ into the sulfate form, which plants can use," Ferrie explains. "This process is driven by microbes. It’s similar to mineralizing organic [or ammoniacal] nitrogen into nitrate."

In the soil solution, sulfate is replenished by mass flow and diffusion. In mass flow, water transpiring out of the plant causes more water to be drawn in through the roots, carrying sulfur along with it. In diffusion, sulfate moves from an area of higher concentration into one of lower concentration—like a drop of food coloring spreading through a glass of water.

"The amount of sulfur consumed by the plant depends on the amount in contact with the root surface," Ferrie adds. "The bigger the root system, the easier it is to pick up sulfur."

Often, when soil warms up in the spring and soil microbes increase, there is a period of net immobilization. That creates a shortage of sulfur available to young corn plants. Ferrie calls this situation the "carbon penalty" because the supply of carbon in old-crop residue causes increased microbial activity. "Sulfur levels will drop like a rock," he says.

If nitrogen is temporarily immobilized, plants can take it up later, when it becomes available. But, because sulfur is not mobile inside plants, they must take up a large portion of their supply in the spring.

"So failing to apply sulfur to help pay the carbon penalty can have season-long effects in continuous corn," Ferrie says.

How you lose sulfur. If a field is flooded and the oxygen is removed, anaerobic microbes convert sulfate, the available form of sulfur, into the unavailable form. If the field stays waterlogged for a week or more, the microbes can convert sulfur to a gas, and it can be lost.

You can tell when sulfur is volatilizing out of a field by the odor. "If a field has been wet for a long time, you sometimes detect a septic smell," Ferrie says. "That smell is sulfur, leaving the field as a gas."

When soil is flooded, the first microbes to activate are denitrifying bacteria. The microbes that convert sulfur to a gas become active later. "If you smell that septic odor, your nitrate nitrogen is already gone," Ferrie says (although nitrogen in the ammonium form may still be present).

Sulfur also can be lost through soil erosion, and it can be leached away by water. But it never travels alone.

"Sulfate ions cling to base cations (calcium, magnesium and potassium)like a cocklebur," Ferrie says. "So if you put on too much sulfur, and then get a lot of rain, you can lose all three.

"The first cation it typically takes is potassium. If you overapply sulfate to a light sand or a silt loam soil, and use ammonium sulfate as your total nitrogen source, you risk losing potassium. That is especially likely to occur on a sandy soil, with irrigation."

How sulfur gets tied up. Sulfur can become unavailable by fixing to clay particles in certain types of soil. "A kaolinite clay, which is often found in the South, has negative charges on only one side of the clay lattice, and positive charges on the other side," Ferrie says. "So negative-charged sulfur ions fix to those positive sites. Such soils require more applied sulfur to get the same response. A montmorillonite clay, on the other hand, has negative charges on both sides, so sulfur ions do not attach."

When pH gets above 7.5, calcium and sulfur ions form gypsum, Ferrie adds. "So you may have a lot of sulfur, but it can’t get into the plant because it is bonded with calcium."

Sulfur and soil acidity. Sulfates are not acidic (although elemental sulfur is). But if you apply ammonium sulfate, it takes twice as much limestone to neutralize the soil as it would if you applied the same amount of nitrogen as anhydrous ammonia, UAN (urea-ammonium nitrate) or urea. "That’s because ammonium is twice as acidic as ammonia," Ferrie says.

For every pound of ammonium nitrogen applied, it takes 8 lb. of limestone to neutralize the acidity. "Remember to account for acidity in your sulfur sources," Ferrie says.

Rules of sulfur management. In highly leachable soils, apply elemental sulfur in the fall, rather than sulfate, to prevent loss. In spring, use the sulfate form. "Elemental sulfur may not become available quickly enough when applied in the spring," Ferrie says.

"In high-phosphorus soils, carry a high sulfur load by applying some of your nitrogen as ammonium sulfate. Your goal is to pull the excess phosphorus out of the soil with your crop, while sticking sulfur back in."

Maintain the proper ratio between nitrogen and sulfur. "Tissue testing gives an indication of the ratio of sulfur to nitrogen in the plant," Ferrie says. "Corn needs about 1 lb. of available sulfur per 14 lb. of available nitrogen."

There are different sulfur extraction processes and reporting methods. Don’t compare results from one lab to another unless you know the same process was used. "One lab might consider a reading of 8 ppm to 12 ppm to be medium, while another lab’s idea of medium might be 25 ppm," Ferrie says.