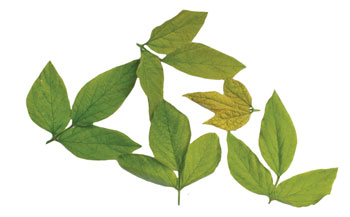 Knowledge will help you avoid problems with this vital micronutrient

Like anything else, the more you know about iron, the easier it is to manage and prevent problems. Let’s start with some basics:

Iron—abbreviated Fe—is a catalyst required for chlorophyll formation. That’s why symptoms of iron problems show up as changes in the plants’ color. “Iron also is essential for synthesizing proteins within the plant,” Ferrie says. “It’s important for making enzymes that aid in respiration and for energy transfer within the plant.

“Iron is called a micronutrient not because it isn’t important, but because only a small amount is required by plants,” Ferrie adds. “Because plants need only a small amount, we may encounter toxicity problems when iron is in oversupply, as well as deficiency issues when plants run short. Deficiencies—called iron deficiency chlorosis—are the most common problem because toxicity usually occurs only in certain soils and in certain localities.”

In soybeans, deficiency symptoms are similar. But, while yellowing occurs between the veins, the veins themselves stay noticeably green.

Iron deficiency shows up faster in soybeans than in corn because soybeans, and some other plants, have to convert iron into a usable form before their roots can take it up from the soil, Ferrie explains. “They do this by excreting acids that convert the iron in the soil solution from the Fe(III) form to the Fe(II) form, which plants can use,” he adds. “Corn plants, on the other hand, can take up the Fe(III) form, but then they must convert it to Fe(II) inside the plant.”

The two forms of iron explain why deficiencies can occur, despite all the iron in the soil solution. Most of it is in the unavailable Fe(III) form. Deficiencies result when conversion to the Fe(II) form slows or stops. That tends to happen in alkaline soil.

“Soil pH is one of the main drivers of iron availability,” Ferrie says. “The higher the pH reading, the more carbonates and bicarbonates in the soil. They, especially bicarbonates, cause iron to become fixed and unavailable.

“The soil environment—wet, dry or cold—is also a factor. Normally, we would expect iron to be available if soil has a pH up to 7.0. But in a neutral soil with a pH of 7.0, crops will have trouble taking up iron if the soil gets saturated with water. The water traps carbon dioxide and bicarbonates, so the iron becomes fixed and unavailable. That’s why we see iron deficiency symptoms show up in new leaves two or three days after a saturating rain.”

In acid soil, the opposite happens. If the soil is saturated with water, and aeration is poor, too much iron might become available. That can result in iron toxicity.

In poorly drained soils, where water ponds in low areas, you might see a ring or halo of iron deficiency chlorosis develop around the ponded areas several days after a saturating rain. That’s because water is being pulled upward through the soil as it evaporates from the surface. The water carries bicarbonates that have built up in the saturated soil. The bicarbonates are deposited around the edge of the pond as the water evaporates.

Soil and tissue testing might help predict iron availability, but they’re not perfect indicators. “The most common test for iron availability is the AB-DBTA extraction test,” Ferrie says. “It is geared to predict the potential amount of iron available for plant uptake. Typically, we expect there is sufficient iron available if the reading is above 5 ppm. You might experience a deficiency if it’s below 3 ppm.

“There’s a problem: The AB-DBTA test is a snapshot in time, and iron availability is keyed to the soil environment—bicarbonate level, oxygen level and temperature. If the soil is cold, plants grow slowly and are less able to convert iron from the Fe(III) form to the Fe(II) form. If soybeans are green and growing well, a soil test will show we have adequate available iron. But if we test soil when the beans are showing chlorosis symptoms, we’ll get a low reading because the soil environment has changed and iron has become less available,” Ferrie says.

Tissue testing is difficult because samples must be free of dust, which could trigger a high reading. If you attempt to wash off the dust, you might distort the test.

Another problem is the iron measured by tissue testing might be in the Fe(III) form. The test might show a high reading for iron, but the iron is not usable by the plant.

“I’ve seen situations where we knew there was an iron deficiency, but the deficiency did not show up in the soil or tissue test,” Ferrie says. “Although the crops showed visual symptoms, the tissue test result said plant levels were high. Yet, when we made a foliar application of iron, both crops turned green.”

Some practices can cause iron deficiency. “One of the most common man-made causes is high amounts of crop residue or manure,” Ferrie says. “If you apply and incorporate high amounts of manure, especially bedding, microbes release carbon dioxide and bicarbonates as they decompose it. If the soil gets saturated with water during this process, bicarbonates might get trapped, triggering an iron deficiency. Another common cause is overliming.”

Once nitrate gets inside a plant, it must be converted to ammonium. The conversion process raises the pH level inside plant cells, which can block the Fe(III) form of iron from converting to the Fe(II) form.

Nitrate levels might become high from overapplying manure, from nitrates carrying over in the soil after a drought or because some soils produce a lot of nitrate. A less common cause is high phosphorus levels, which also can fix iron.

The opposite problem from iron deficiency chlorosis is toxicity, caused by excess available iron in the soil. “Muck soils might have high levels of available iron,” Ferrie says. “High iron levels reduce the availability of manganese. Almost all micronutrient problems are caused by an excess of some other nutrient.”

In severely acid soils, with pH in the low 5 range, iron levels (along with aluminum levels) might become excessive. “Excess iron can tie up phosphorus and manganese,” Ferrie says.

In our next article, we’ll explain how to avoid or fix iron problems, whether caused by man or Mother Nature.